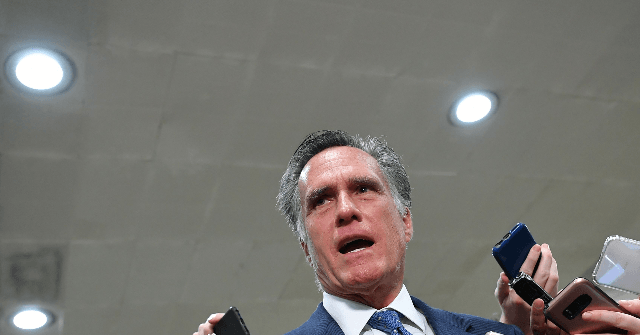 “If the President asked or pressured Ukraine’s president to investigate his political rival, either directly or through his personal attorney, it would be troubling in the extreme,” he wrote on Twitter:

If the President asked or pressured Ukraine’s president to investigate his political rival, either directly or through his personal attorney, it would be troubling in the extreme. Critical for the facts to come out.

Romney’s comments come after a report published Saturday by the Wall Street Journal which said a whistleblower claimed that the president urged Ukrainian president Volodymyr Zelensky during a July phone call to look into Biden’s son Hunter’s business dealings with the eastern European country.

‘He told him that he should work with [Mr. Giuliani] on Biden, and that people in Washington wanted to know’ whether allegations were true or not, one of the people said. Mr. Trump didn’t mention a provision of foreign aid to Ukraine on the call, said this person, who didn’t believe Mr. Trump offered the Ukrainian president any quid-pro-quo for his cooperation on an investigation.

However, congressional Republicans have come out in defense of President Trump by stating that private phone calls between the president and foreign leaders are imperative if he is to perform his job well.

“The fact is, the president, to quote John Marshall, is the ‘sole organ’ of U.S. external relations and has to have conversations in confidence with foreign leaders. There’s no practical way to conduct diplomacy without it,” said Rep. Mike Gallagher (R-WI).

CNN’s Chris Cuomo asked President Trump’s attorney, Rudy Giuliani, on Thursday during Cuomo Primetime whether or not he asked the Ukraine to investigate Joe Biden.

“No, I didn’t ask them to look into Joe Biden,” Giuliani said. “I asked them to look into the allegations that related to my client, which, tangentially, involved Joe Biden in a massive bribery scheme, not unlike what he did in China.”

On Friday, President Trump defended himself against the whistleblower’s accusations in a tweet.

The Radical Left Democrats and their Fake News Media partners, headed up again by Little Adam Schiff, and batting Zero for 21 against me, are at it again! They think I may have had a “dicey” conversation with a certain foreign leader based on a “highly partisan” whistleblowers..

While speaking to reporters outside the White House on Sunday, the president appeared to be willing to release the transcript of the phone call in question.

“We had a very great conversation, very straight, very honest conversation. I hope they can put it out,” he concluded.