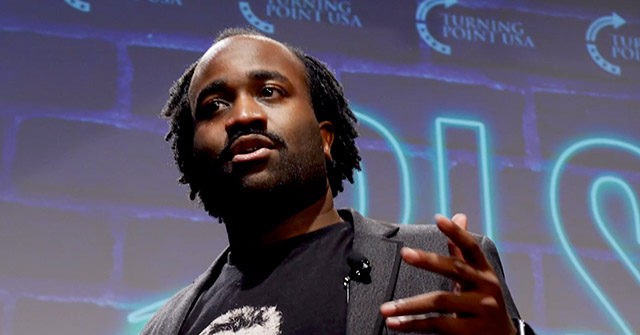 Breitbart News Entertainment Editor Jerome Hudson spoke at Turning Point USA’s annual Black Leadership Summit (BLS) in Washington, D.C., on Saturday, and told an audience of hundreds of young activists that “there’s a political awakening happening in America and it’s being led by young free thinkers like you.”

“The left tells lies,” said Hudson, “people like Jesse Jackson and Al Sharpton and Barack Obama, they’re all race hustlers and victimhood vendors. You see they called America racist. They called capitalism racist. These people even said that personal responsibility is racist. Hell, everything, to them, was racist.”

“We all know that for nearly 200 years, the Democratic Party has presided over the destruction of black life in America,” said Hudson. “And the numbers don’t lie — are we not supposed to add up all the many ways that leftist policies that have left people like us in a worse state?”

“Their constant support for Planned Parenthood has resulted in the destruction of millions of black lives in America,” he added. “For decades, they’ve tried to replace the natural role of the black two-parent household.”

“Enough is enough,” affirmed Hudson. “Today, our message to the race hustlers is this: you had your chance, you did not lead, and now we will.”

Hundreds of black conservatives have gathered in Washington, D.C. for the three-day event featuring speeches by prominent leaders in the conservative movement today, such as BLEXIT founder Candace Owens, syndicated radio host Larry Elder, and TPUSA founder Charlie Kirk, among others. Attendees also met with President Donald Trump on Friday at the White House.

Hudson also talked about Breitbart News founder Andrew Breitbart, who used to tell people at events — just like BLS — to get out their cellphones and harness their power as citizen journalists.

“You see, the left is afraid of you, because they know that you’re dangerous, and so they try to silence you,” explained Hudson, “but you are powerful because you’re vocal. And trust me, I know the price that you pay for being a young, black freedom fighter.”

A decade ago I heard Andrew Breitbart encouraging young freedom fighters that look just like you to be happy warriors. You see, I was in college at the time, and I had chosen to reject the left’s silly expectations for how I should think as a young black man. My college campus looked then, looked like far too many of your college campuses look today. Islands of closed-mindedness, where young people are not encouraged to think critically, but are instead programmed to be skeptical of those who do.

Hudson concluded by offering attendees three suggestions regarding how they can “help free more minds” in today’s political climate.

“Love and support each other’s journeys,” he said. “Have each other’s backs — and remember that as young leaders, it’s your responsibility to help illuminate the path forward.”

“The second thing is, know the facts,” continued Hudson, who then encouraged attendees to read conservative news outlets, rather than just going to the establishment press for information. “Arm yourself with the informational weapons that you will need to win ideological battles on your campus.”

“The third thing is this: have fun,” said Hudson. “Be happy warriors. Take it from me, there’s nothing more that pisses off the left more than a joyful, black conservative.

“And always remember the lesson that history taught us long ago,” concluded Hudson. “Evil wins when good people remain silent.”

Jerome Hudson is author of the national bestseller, 50 Things They Don’t Want You to Know, which hit bookshelves nationwide on September 17. Order your copy today. Follow Jerome Hudson on Twitter @jeromeehudson.