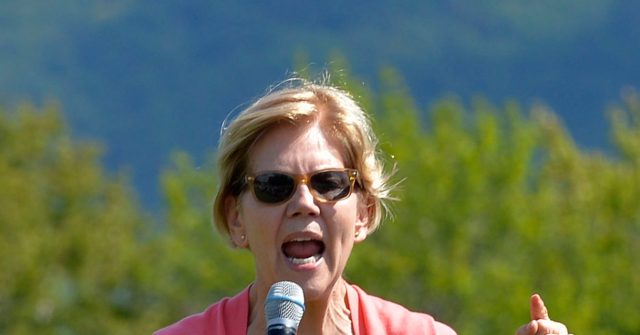 A more recent study found that while whites largely cause air pollution, Blacks and Latinxs are more likely to breathe it in. Unsurprisingly, these groups also experience higher rates of childhood asthma. And many more low-income and minority communities are exposed to toxins in their water – including lead and chemicals from industrial and agricultural run-off.

“We need a government that’s on the side of families—not giant corporations polluting our communities. @RashidaTlaib and I walked through 48217, the most polluted zip code in Michigan, and talked with the families living every day with the effects of pollution,” Warren tweeted alongside the clip:

We need a government that’s on the side of families—not giant corporations polluting our communities. @RashidaTlaib and I walked through 48217, the most polluted zip code in Michigan, and talked with the families living every day with the effects of pollution. pic.twitter.com/LsXlZQza7r

Like Warren’s other proposals, her environmental injustice plan weaves in aspects of her other campaign promises. For instance, Warren says her housing plan will provide an assistance program, aimed to get impoverished families out of poor, pollution-ridden neighborhoods and into the “neighborhood of their choice.”

She also pledges to invest one-third – or $1 trillion – of her climate change investment “into the most vulnerable communities,” although she does not specify what the $1 trillion will be spent on, specifically.

Like most of Warren’s plans, her environmental injustice proposal involves the implementation of another tax. In this instance, it is the “Superfund Waste Tax.”

There are over 1300 remaining Superfund sites across the country, many located in or adjacent to frontline communities. So-called “orphan” toxic waste clean-ups were originally funded by a series of excise taxes on the petroleum and chemical industries. But thanks to Big Oil and other industry lobbyists, when that tax authority expired in 1995 it was not renewed. Polluters must pay for the consequences of their actions – not leave them for the communities to clean up. I’ll work with Congress to reinstate and then triple the Superfund tax, generating needed revenue to clean up the mess.

The presidential hopeful even weaves in Medicare for All as part of her broader proposal, arguing such a system will “make it easier for the federal government to quickly tailor health care responses to specific environmental disasters in affected communities when they occur.”

Warren also reiterates her pledge to “ensure that employers and our government honor the promises they made to workers in fossil fuel industries.”

“I’ve fought for years to protect pensions and health benefits for retired coal workers, and I’ll continue fighting to maintain the solvency of multi-employer pension plans,” she said. “As president, I’ll protect those benefits that fossil fuel workers have earned.”

However, Warren’s role in crafting a petition to the Supreme Court on behalf of LTV Steel – which helped the company’s “fight against a congressional requirement  that it pay millions of dollars into a fund for its retired coal miners’ health care” – calls her promise into question.

“These communities need justice—and I will stand with them,” she added:

Industrial pollution has been concentrated in communities of color due to decades of discrimination and racism—and a system that puts corporate profits before people. We need big, structural change, focused on and led by members of those communities.

As we work to enact the #GreenNewDeal, I’ll make sure that frontline community leaders who know best what their neighborhoods need are elevated in my White House and lead the way toward the big, structural change we need. They’ve been doing this work for decades—we should listen.

But we must ensure that we honor our commitments to fossil fuel workers as we transition to the new green economy. We’ll ensure that new jobs have similar wages and benefits. And I’ll fight to protect the pensions and benefits that they’ve earned.

As I’ve traveled this country, I’ve heard the human stories from frontline communities. Families where many people have cancer. Coastal communities facing the threat of rising sea levels. Ruined land and poisoned water. These communities need justice—and I will stand with them.