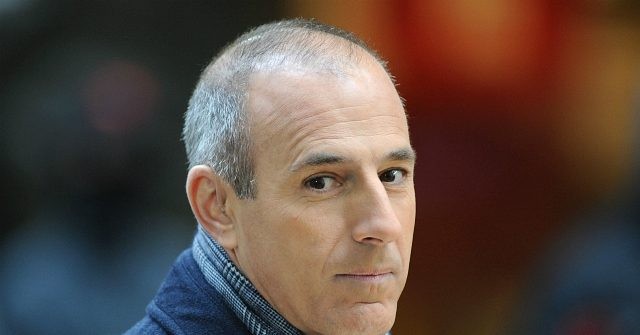 Ronan Farrow’s upcoming book Catch and Kill alleges Matt Lauer anally raped an NBC co-worker in 2014, and that after learning of the allegation in 2017, the far-left network covered it up.

The explosive allegation comes from Brooke Nevils, a former NBC News staffer, who told her story to Farrow and who was responsible for Lauer’s abrupt firing from the Today Show in November of 2017.

At the time, Nevils was working with then-Today Show co-host Meredith Vieira. The two of them were having drinks at the hotel bar when Lauer dropped by. After six shots of vodka, Nevils went to Lauer’s hotel room twice. The first time was to retrieve her press pass, the second was at Lauer’s invitation. According to Farrow, Nevils said she “had no reason to suspect Lauer would be anything but friendly based on prior experience.”

Variety, who received an advance copy of the book, describes the alleged rape:

According to Nevils, she “was in the midst of telling him she wasn’t interested again when he ‘just did it,’” Farrow writes. “Lauer, she said, didn’t use lubricant. The encounter was excruciatingly painful. ‘It hurt so bad. I remember thinking, Is this normal?’ She told me she stopped saying no, but wept silently into a pillow.” Lauer then asked her if she liked it. She tells him yes. She claims that “she bled for days,” Farrow writes.

Due to her fear over the power Lauer had to help or hurt her career, Nevils admits she embarked on a consensual sexual affair with Lauer.

“This is what I blame myself most for,’” she told Farrow. “It was completely transactional. It was not a relationship.”

Here is where things get sticky for NBC News…

After she stopped seeing Lauer, Nevils told Farrow she “told like a million people” what had happened with her and Lauer. “She told her colleagues and superiors at NBC,” and after she switched jobs, she “reported it to one of her new bosses there.”

“This was no secret,” Farrow writes.

Still, “[n]othing happened until fall 2017, when the post-Harvey Weinstein reckoning led former Today colleagues to ask her about Lauer,” Variety writes. This prompted her to tell Vieira, who told Nevils to hire a lawyer and go to NBC’s human resources.

And this is when Matt Lauer was unceremoniously fired from the top-rated morning show on television.

Variety goes on to lay out why this is such a problem for NBC News:

After Lauer’s firing, she learned that Noah Oppenheim, the president of NBC News, and Andrew Lack, the chairman of NBC News and MSNBC, “were emphasizing that the incident hadn’t been ‘criminal’ or an ‘assault’” — which she claims caused her to throw up, Farrow writes.

“Nevils’s work life became torture,” according to Farrow. “She was made to sit in the same meetings as everyone else, discussing the news, and in all of them colleagues loyal to Lauer cast doubt on the claims, and judgment on her.”

And though Nevils had been promised anonymity by human resources, Lack saying internally that the encounter had happened at Sochi limited the possibilities of complainants — and soon, everyone knew it was Nevils. Though Nevils had not wanted money, she went on medical leave in 2018, and was eventually paid, Farrow writes, “seven figures.”

“The network proposed a script she would have to read, suggesting that she had left to pursue other endeavors, that she was treated well, and that NBC News was a positive example of sexual harassment,” Farrow writes.

What’s more, after Lauer was fired, story after story came out confirming what Farrow says in his book, that Lauer’s sexual misconduct was no secret in the news division.

In December of 2017, an insider told the New York Post that “complaints” about Lauer’s sexual misconduct date all the way back to when Jeff Zucker, who now runs the far-left CNN, was in charge of the Today Show.

Catch and Kill comes out next week and will cause a separate set of headaches for the left-wing outlet. According to Variety, Farrow finally tells the whole sordid story about how he had the goods on movie mogul Harvey Weinstein, but NBC News refused to run the story. As Breitbart News previously reported, Farrow’s reporting included audio tape of Weinstein appearing to admit he groped a model, a bombshell news story by any measure, but still NBC refused.

Why would NBC refuse such an opportunity? Well, we also learned that the aforementioned Oppenheim, no less than the president of NBC News, is an ambitious screenwriter who had recently attended an event with Weinstein.

Incredibly, NBC News ended up sending Farrow and his story down the road to the New Yorker, where the investigative reporter would win a Pulitzer for his Weinstein exposé.

Farrow’s reporting also launched the #MeToo movement, a movement that exposed the left-wing institutions of Hollywood and the news media as dens of sexual abuse, cover ups, and enablers willing to look the other way.