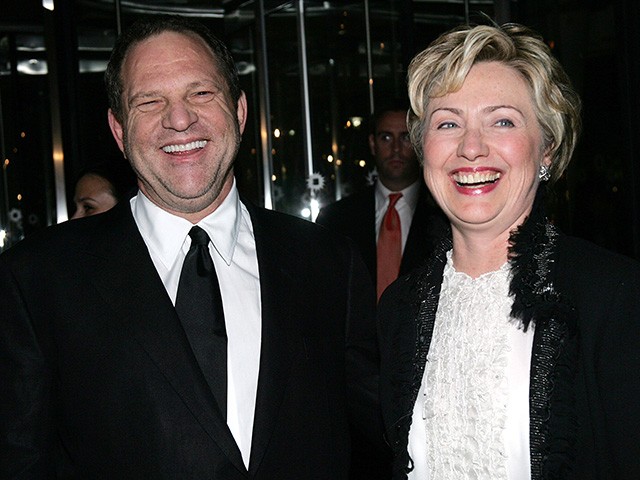 One of the many news-making revelations in Ronan Farrow’s upcoming book, Catch and Kill, is that he received pressure from Hillary Clinton to back off his reporting on Harvey Weinstein.

The far-left Hollywood Reporter, which received an advanced copy of the book, naturally buried this bombshell under no fewer than 20 paragraphs and a headline that says nothing about Madame Clinton.

Weinstein also attempted to leverage his long-term relationship with Hillary Clinton to pressure Farrow, he writes. In summer 2017, while Farrow was trying to lock down an interview with Clinton for his foreign policy book — while also still working on the Weinstein story — he received a call from Clinton’s publicist, Nick Merrill, who told him that the “big story” Farrow was working on was a “concern for us.” Then, in September 2017, according to an email cited in the book, Weinstein wrote to Deborah Turness, the ex-president of NBC News who now runs NBC News International, to propose a docuseries on Clinton. “Your Hillary doc series sounds absolutely stunning,” Turness responded.

Weinstein’s tentacles even stretched to Farrow’s own estranged father. Days before the Times story broke, Weinstein is said to have called Allen on a film set in Central Park, soliciting advice about how to deal with his son. Allen declined: “Jeez, I’m so sorry. Good luck.”

Please note that Merrill is Hillary’s longtime publicist. He works for her, and it seems unlikely he would do such a thing without her instructions. What’s more, as of now, Merrill has not denied the reporting.

To understand just how awful Hillary’s behavior is here, you have to keep in mind the context of the time, of what was happening in 2017.

To begin with, as Breitbart News reported in December 2017, there are credible reports Hillary Clinton had known about Weinstein’s alleged sexual misconduct and abuse going back to her failed 2016 presidential campaign.

From the far-left New York Times:

“I just want you to let you know that Harvey’s a rapist and this is going to come out at some point,” Ms. Dunham said she told Kristina Schake, the campaign’s deputy communications director. She recalled adding, “I think it’s a really bad idea for him to host fund-raisers and be involved because it’s an open secret in Hollywood that he has a problem with sexual assault.”

Ms. Dunham said she also warned Adrienne Elrod, a spokeswoman for Mrs. Clinton who was leading efforts with celebrity campaigners. As far as Ms. Dunham could tell, the campaign had not responded to her concerns about Mr. Weinstein. Weeks before Election Day, the producer helped organize a star-packed fund-raiser: an evening on Broadway with Julia Roberts, Anne Hathaway and others.

But even without this reporting, what we also know is that Weinstein’s alleged misconduct and abuse were no secret in Hollywood and Washington, DC. Report after report after report confirm that “everyone knew,” but no one did anything because 1) Weinstein had the power to make or break your Hollywood career and 2) Weinstein raised a ton of money for Democrats — most especially, the Clintons; most especially, Hillary Clinton.

On top of that, at the time, it was no secret Farrow was working on what would be a Pulitzer-winning Weinstein exposé. Everyone knew because Farrow was reaching out to everyone to put the story together.

According to Farrow, Weinstein understood this report could completely destroy his life, career, and reputation (which it did), and so, the Oscar-winning producer went so far as to try to intimidate Farrow, using everything from spies to threats aimed at Farrow’s employers at NBC News. Farrow says Weinstein told NBC he would expose the network’s top star, Matt Lauer —  meaning the alleged sexual misconduct that eventually unraveled the Today Show anchor’s career.

For the record, NBC News denies being threatened with Lauer. Nevertheless, NBC did refuse to run Farrow’s Weinstein story. Eventually, the far-left news outlet sent its own reporter and his bombshell story down the road to the New Yorker, where Farrow would not only win a Pulitzer, but launch the #MeToo movement that took down Lauer anyway.

Anyway, this Hillary Clinton bombshell could not come at a worse time for the two-time presidential loser, a time when she appears to be seriously flirting with the idea of a 2020 rematch with President Trump. She might want to remember that during their 2016 battle, Trump was not afraid to remind voters that Hillary played a leading role to personally destroy the women who claimed to have been raped, abused, molested, and mistreated by her husband, former President Bill Clinton.