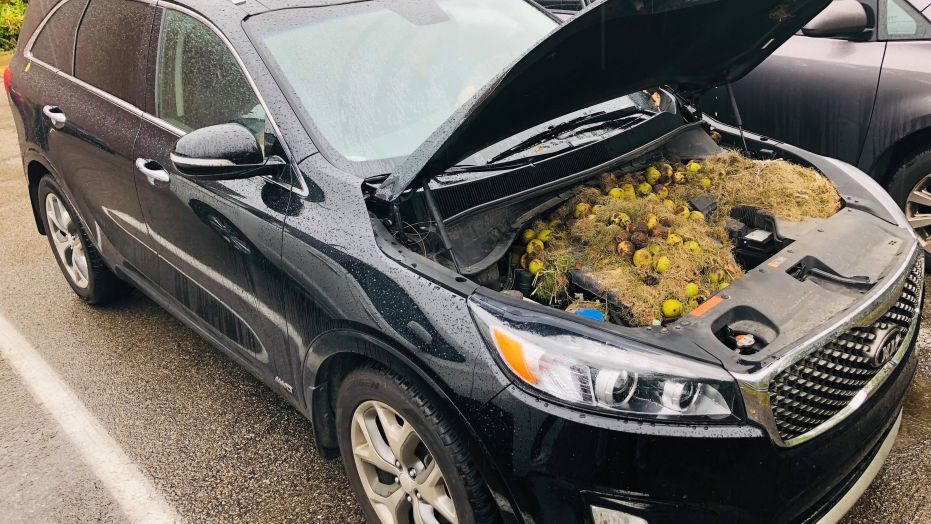 As the leaves begin to change color and fall, and the weather cools down, and the crispness reaches the air, the critters are hard at work preparing for the winter.

Some animals start eating more to build up fat reserves, while others start building their ultimate winter dream homes and stashing all the food they need to get through the darkest and coldest months of the year.

If you have certain kinds of trees in your backyard— especially nut trees — you will find that the desperate scramble of small rodents to grab food is certainly here.

Chris Persic of Pittsburgh had a walnut tree in his yard, but he found something unusual about it.

“Funny thing is I was thinking that for how massive the tree is, and how many walnuts have fallen (and how many dents our vehicle received), there really aren’t many on the ground,” Persic told KDKA-TV.

It wasn’t long before he and his wife Holly made a shocking find of where all those walnuts had gotten to, and it ended in some minor damages and a Facebook post to issue a warning to others about just how disastrous those adorable little rodents can be.

“Here’s a little PSA for everyone on this rainy Monday,” Persic wrote in a Facebook post on Monday. “Rodents and vehicles do not mix.”

“My wife called me from Northland Library and said that her car smelt like it was burning, and was making a weird sound. I told her to pop the hood, and this is the picture that she sent me!”

The photo, of course, has been making the rounds on the internet, showing large heaps of dried grass nests peppered with green-husked walnuts.

“I was at Shorkey on McKnight after getting towed (my truck has 4000 miles on it) because it started to shake when accelerating and the check engine light was on,” Persic wrote.

Here’s a little PSA for everyone on this rainy Monday:Rodents and vehicles do not mix… My wife called me from…

“I got a rental and headed over to clean out over 200 (not an exaggeration) walnuts and grass from under the hood. It took almost an hour, and we were able to clean it enough to take it to Tevis Auto Service (thanks for getting us in so quick!) to check it out.”

Persic then used the photo and story to warn other car owners to keep an eye on their cars parked outside to make sure that the same thing isn’t happening to them.

“Long story short, if you park outside, do yourself a favor and check under the hood every once in awhile,” he wrote

According to KDKA, the mechanics found even more walnuts under the engine, where the diligent squirrels had hidden them away.

Thankfully, no significant damage has been done— which is not always the case when rodents and cars mix. Persic fears the furry friends might be responsible for more costly repairs to his own vehicle.

“Turns out my truck may have had a squirrel chew through or pull the fuel injector hose out,” he said.