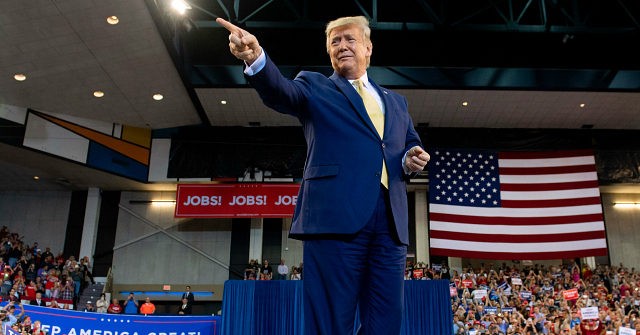 The radical Democrat politicians are corrupt and “their candidates are terrible,” President Donald Trump said during a rally in Lake Charles, Louisiana, on Friday.

“We’ve been living through this so-called ‘insurance policy’ because they know we’re putting a stop to their pillaging and their plundering and their hoaxes,” Trump said, referring to text messages sent between former Federal Bureau of Investigation (FBI) employees Peter Strzok and Lisa Page in which they discussed stopping him from becoming president in 2016.

“The radical Democrats’ policies are crazy, their politicians are corrupt, their candidates are terrible, and they know they can’t win on Election Day so they’re pursuing an illegal, invalid, and unconstitutional bullshit impeachment,” the president concluded.

“You know, to preserve our constitution, our democracy, our basic integrity,” Biden said, “he should be impeached. That’s not only because of what he’s done. To answer whether he’s committed acts sufficient to warrant impeachment is obvious.”

“It’s no joke. He’s shooting holes in the Constitution, and we can not let him get away with it,” Biden concluded.

However, President Trump defended himself against the Democrats’ calls for impeachment on Wednesday by tweeting that he did nothing wrong:

Only 25 percent want the President Impeached, which is pretty low considering the volume of Fake News coverage, but pretty high considering the fact that I did NOTHING wrong. It is all just a continuation of the greatest Scam and Witch Hunt in the history of our Country!

On Thursday, Rep. Jim Jordan (R-OH) echoed the president’s statements by saying that Democrats were using impeachment as a political campaign:

This isn’t impeachment. This is a political campaign.

Democrats know they won’t win a REAL campaign, so they are:
-Abusing House procedures
-Selectively leaking information
-Hiding the truth from the American people

They’re just making the rules up as they go along.

On Wednesday, Jordan wrote on Twitter that Democrats were “so busy ‘striking while the iron is hot’ that they didn’t even have a vote to start their crazy impeachment proceedings!”

“Or maybe they didn’t want to go on record for the American people. President Trump is right to call them out for this biased & unfair process,” he concluded.