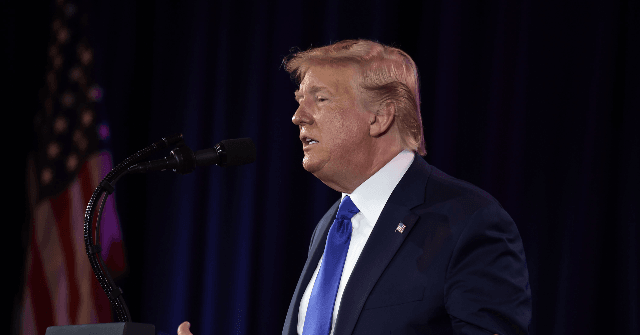 President Donald Trump spoke at length about the sense of urgency to move troops out of the Middle East on Saturday, defending his decision not to defend the Kurds from Turkish aggression in Syria.

“These wars, they never end,” Trump said. “And we have to bring our great soldiers back from the never-ending wars.”

The president spoke to his supporters at a Value Voter Summit in Washington, DC, acknowledging the difficulty of the ongoing conflict in Syria.

Trump argued that the contested area in Syria was only about 22 miles of borderland in Turkey, and that the Kurds had been fighting the conflict for years.

“Let them have their borders,” he said, referring to Turkey, “But I don’t think that our soldiers should be there for the next 50 years guarding a border between Turkey and Syria when we can’t guard our own borders at home.”

The crowd applauded Trump’s remarks, especially when he reminded them that the Islamic State was defeated in the Middle East.

“We killed ISIS, we did our job, we have to go home,” he said, as the crowd applauded.

Trump revealed he was ready to withdraw troops from the Middle East when ISIS was only 98 percent defeated, but that the foreign policy establishment was highly critical of the idea.

“The military-industrial complex came down on me, so I went to get 100 percent,” he said.

Trump was critical of his “Washington generals” for their repeated assertions that certain conflicts in the Middle East would be wrapped up soon.

“They’re overrated,” he said, praising instead the generals who were actually deployed overseas.

Trump said he frequently felt alone in his fight to bring the troops home, but felt that he was on the right path.

He recalled in detail what it was like to be at the Dover Air Force Base with the families of soldiers who lost their lives overseas.

Trump said that despite the bravery and strength shown by family members and loved ones, they usually broke down when the flag-draped coffin came out of the cargo plane.

“You would hear the screams and cries like you’ve never heard before actually,” he said.

Trump recalled a colonel once told him that sometimes a wife or a mother would break through the military line and throw themselves on the coffin after it emerged from the plane and express their sorrow.

“We’ve been in these wars now, one of them 19 years, and we don’t fight to win, we fight to just stay there,” he said.

Trump said he hoped that the Kurds would withdraw from the border areas of Syria next to Turkey, rather than fight their forces.

“No matter what we did the media will say it’s the wrong decision, I see it, it makes no difference,” he said.

The president repeated that going into the Middle East was the worst decision ever made by the United States, noting the expensive war and the loss of life over weapons of mass destruction that did not exist.

“We don’t want to be in 19-year wars where we serve as the police force of the entire country,” Trump said, referring to the war in Afghanistan.