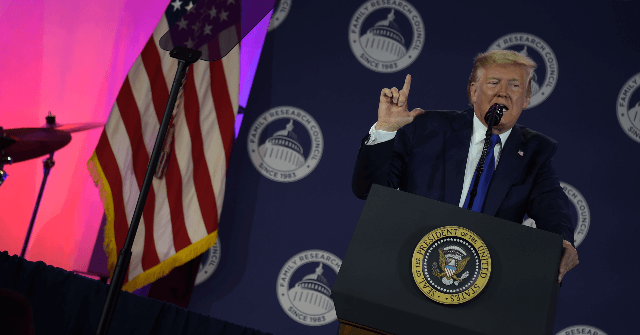 President Donald Trump rallied supporters on Saturday during a speech to Value Voters, as the Democrat-led impeachment inquiry continued.

“They’re coming after me because I’m fighting for you,” Trump said.

The president spoke to religious conservatives at the Value Voters Summit in Washington, DC, hosted by the Family Research Council.

He appeared shocked that Democrats began an impeachment inquiry over a simple phone call with Ukranian President Volodymyr Zelensky, when he said that the president himself said that he did not feel pressured by Trump.

“The whistleblower said quid pro quo eight times,” Trump said. “It was a little off. No times.”

He expressed anger at Speaker Nancy Pelosi and House Intelligence Chairman Adam Schiff for continuing the impeachment inquiry based on lies.

“Maybe we just impeach them because they are lying,” he said. “What they are doing is a terrible thing to our country.”

Trump also drew cheers after he praised Justice Brett Kavanaugh as a “good man,” and that Republicans did not back down.

“Impeachment,” Trump says at Values Voter Summit. “I never thought I’d hear that word with regard to me.”

The president also criticized Republicans for failing to stay united when Democrats attacked.

“It’s the one trait that I do respect and even admire — they stick together,” he said, referring to the Democrats.

Trump spoke about protecting the First Amendment of free speech, the Second Amendment, and rebuilding a strong military and the right to free speech. He criticized Democrats running for president for pursuing radical leftist policies without consideration for the right to religious freedom.

“Socialism is obsessed with the pursuit of power because it has replaced religion in their lives,” he said.

The president received a standing ovation when he reminded them that America stood for freedom of religion and the right to life.

Without naming him, Trump referred to former Rep. Beto O’Rourke for threatening to remove tax exemption from religious groups who oppose same-sex marriage.

“In this administration, we believe that every child born and unborn is made in the holy image of God,” Trump said.