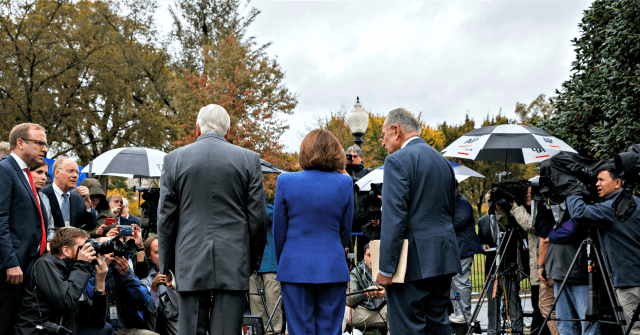 A White House meeting between President Donald Trump and members of Congress blew up after the foreign policy establishment tried to convince him to keep American soldiers in Syria and act to defend the Kurds.

Members of Congress were deeply disturbed by Trump’s remarks on Wednesday, as he spent the majority of the day defending his decision not to engage militarily in Syria against the Turkish attack on the Kurds.

The House sent a strong rebuke to the president, voting 354-60 on a resolution opposing Trump’s foreign policy decisions in Syria.

But the meeting did not last long.

“He was insulting, particularly to the Speaker, she kept her cool completely but he called her a third-rate politician,” Schumer said to reporters at the White House after they walked out the meeting. “This was not a dialogue, it was sort of a nasty diatribe not focused on the facts.”

Pelosi said that Trump had a “meltdown,” repeating previous accusations after meeting with the president.

“What we witnessed on the part of the president was a meltdown, sad to say,” she said.

She also detailed her response to Trump

“I said, ‘I wish you were a politician Mr. President, then you would know the art of the possible,’” she said.

According to Schumer and Pelosi, Trump also told Democrats that some of the members of ISIS were “communists” which “that might make you happy.”

Schumer said that McConnell told Trump that his decision in Syria was “wrong” and challenged the Senate Majority Leader to bring up the House-passed resolution in the Senate.

“While Democratic leadership chose to storm out and get in front of the cameras to whine, everyone else in the meeting chose to stay in the room and work on behalf of this country,” she said in a statement, defending Trump as “measured, factual and decisive” in the meeting.

Grisham called Pelosi’s decision to walk out of the meeting “baffling, but not surprising.”

“She had no intention of listening or contributing to an important meeting on national security issues,” she said.

Trump shared photos of Speaker Pelosi on Twitter, accusing her of having a meltdown.

House Republicans also spoke to reporters at the White House when the meeting was finished.