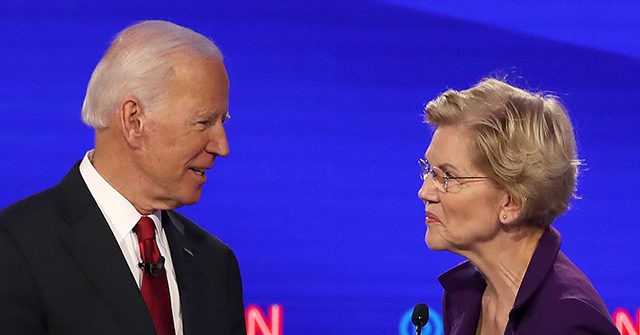 “I had an idea for a consumer agency that would keep giant banks from cheating people, and all of the Washington insiders and strategic geniuses said ‘don’t even try because you will never get it passed,’” Warren recalled of her plans for the CFPB, a government agency responsible for consumer protection in the financial sector that was formed in 2011. “We need to get out there and fight for the things that touch people’s lives,” the senator added.

Biden on CFPB, which Warren helped create: “I went on the floor and got you votes. I got votes for that bill. I convinced people to vote for it”

Warren: “I am deeply grateful to President Obama.”

Biden then blurted out: “I agreed with the great job she did!”

The former vice president then raised his voice as he explained how he secured votes in Congress to establish the agency.

“I got votes for that bill. I convinced people to vote for it. So, let’s get those things straight too,” Biden said.

“I am deeply grateful to President Obama, who fought so hard to make sure that agency was passed into law,” Warren replied softly, prompting laughter from both Biden and debate attendees.

“I am deeply grateful to every single person who fought for it and who helped pass it into law, but understand—,” she continued.

Biden then interrupted Warren with a compliment, stating: “You did a hell of a job in your job.”