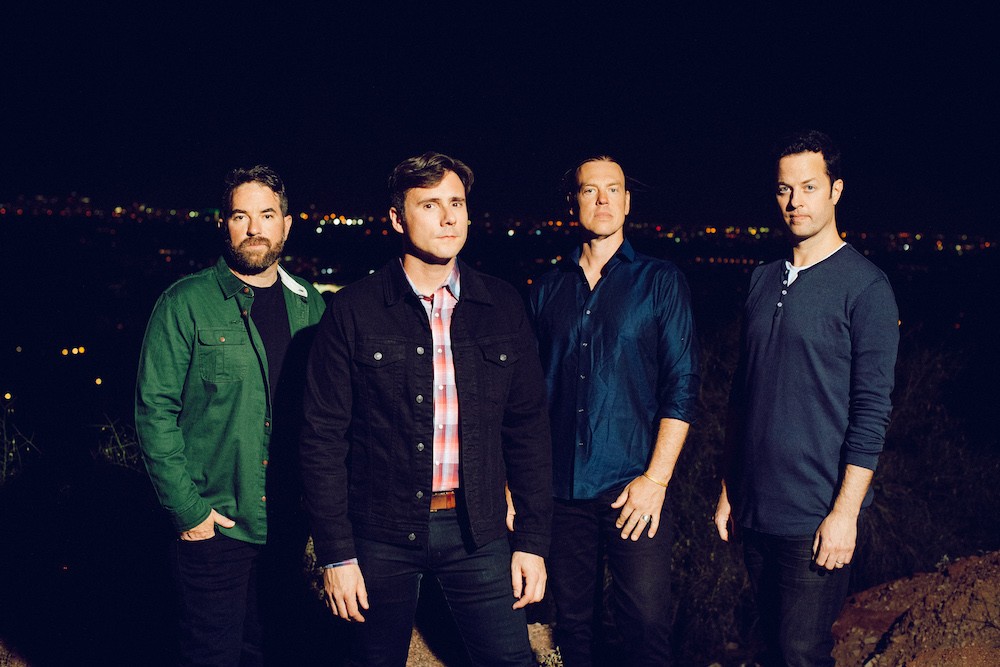 It’s been a year of major milestones for Jimmy Eat World. Back in February, the group—frontman Jim Adkins, guitarist/vocalist Tom Linton, bassist Rick Burch and drummer Zach Lind—celebrated the 20th anniversary of Clarity, one of their most beloved and essential albums. The same month, they celebrated the 25th anniversary of the band itself with a surprise local gig in Phoenix, Arizona, just down the road from where they started the band as high schoolers in Mesa. And this Friday, they’ll release their tenth studio album, appropriately titled Surviving.

“I’ve realized that the place we’re at right now as a band is rare, and the fact that we’re still doing this is not common,” Adkins tells SPIN by phone when asked if he thinks about those sort of things—big dates and milestones—or if they’re just something music journalists like to ask about. “I notice smaller and smaller things that I should be grateful for,” he goes on. “That’s how I try to honor the fact that we’ve been doing this for so long.”

Adkins has earned the right to reflect, but he and the band have no interest in resting passively on their legacy. Jimmy Eat World began writing the material that would become Surviving in 2016, around the release of their previous album Integrity Blues. But things kicked in “for real,” as Adkins puts it, two summers ago. When it came time to record, they reunited with producer Justin Meldal-Johnsen, who co-produced both this album and the last one with the band.

“Justin’s great. He has such a wide range of experience and interests,” Adkins says. “Some producers you work with because there’s a sound that’s associated with them, but I think with Justin, you really get that he’s helping you with your record. He’s not making his record.”

Adkins has said previously that the recording process for Surviving involved stripping away everything that wasn’t needed to make the album’s 10 songs better. On lead single “All The Way (Stay),” the result is recognizably Jimmy Eat World, but with an additional stripped-down rock’n’roll swagger, the verses riding a single Camaro-ready riff. Was it difficult to let it go, recognize when it’s time to stop, and not tinker with tracks for days on end?

“Once you define the lines you want to color within it’s pretty easy to adjust your creative decisions around that,” Adkins says. He elaborates: “If you listen to ‘All the Way (Stay),’ there’s a lot of negative space in there. There’s sections of the song where you’re basically just listening to the snare drum decay in the room and that’s it, just nothing else happening.

“In a way, it makes what happens after that even more heavy. If you remove things, or if you have less things that are supposed to do more, and that’s your mindset when you’re making creative decisions, you just choose things that will mean more. Listen to a Rage Against the Machine album, or listen to Van Halen. That’s just a four-piece band playing, and you don’t miss anything.”

When Surviving was announced, the frontman said in a statement that the record “explores some of the different kinds of weights my ego tells me I have to carry, what I see people around me choosing to carry and what I have found to be the truth when I choose to let go.” The album’s lyrics are introspective, heartfelt, and infused with astute social observations, like this one from “All the Way (Stay)”: “Who really says they hope they meet ‘the one’/For the first time at a bar?”

“Lyrics are always hard. That’s my least favorite part of this whole thing” Adkins says, because writing them is “the easiest place to instantly self-critique.”

“You have a sense of a feeling that you’re expressing, but when you start putting words to it, it gets real. And that might put you in a new place, which ironically, is the whole goal of this whole thing: to put yourself in a new place. That’s what you’re doing when you’re writing or creating something. It’s like you’re exploring a new space.”

When Surviving drops on Friday, Jimmy Eat World will be in the U.K., playing a handful of shows before returning for a U.S. tour that kicks off Nov. 2 in Fort Collins, Colo. Adkins says the set lists are still taking shape, but might include “some deeper Damage and Invented songs that reappear, because we haven’t played those in a while,” in addition to an emphasis on the Surviving material.

Singing the album’s lyrics night after night on the road may help reinforce some of the ideas that resulted from the exploration in Adkins’s writing process. In “Diamond,” he uses the metaphor of precious gemstones forming deep in the Earth to remind listeners that big change doesn’t always happen overnight.

“That’s definitely something I need to tell myself often,” he says. “It’s really hard for me to celebrate the small victories, but it’s so important because that’s what’s going to give you momentum to take on the bigger problems, the real stuff that you have to uncover and dig at. You don’t get the perseverance to actually take that on without some wins on the smaller level. It’s important because that’s all we have, really. Everything you do is just moving closer toward—it’s just progress. There’s no finish line, really. There’s no end. It can be hard to accept that at the end of the day—to gather your sense of worth from movement rather than a finish line.”