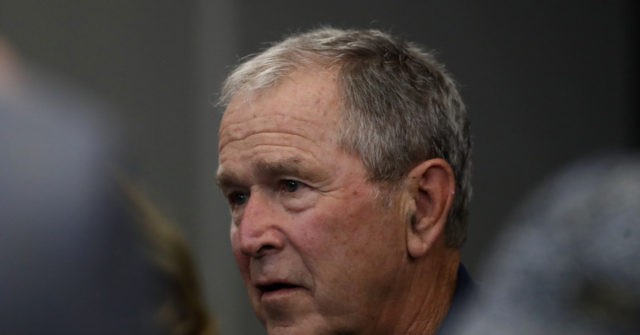 Former President George W. Bush, who led the United States into war across the Middle East, attacked President Trump on Wednesday night, saying U.S. intervention is necessary “for the sake of peace” around the globe.

During a panel alongside former President Bill Clinton at the Nir School of the Heart, Bush laid into Trump for his recent decision to withdraw up to 1,000 American troops from northeast Syria — fulfilling his longheld campaign promise to bring troops home after more than a decade of war.

“An isolationist United States is destabilizing around the world,” Bush said, according to the Washington Post‘s Josh Rogin. “We are becoming isolationist and that’s dangerous for the sake of peace.”

In total, Bush’s post-9/11 wars in Iraq, Afghanistan, and intervention in Pakistan have resulted in the deaths of between 480,000 and 507,000 people — including nearly 7,000 American soldiers who had deployed to the regions.

Today, the overwhelming majority of American Veterans and all U.S. voters say that Bush’s wars in Afghanistan and Iraq were “not worth fighting” more than a decade later, the latest Pew Research Center survey finds. Likewise, nearly six-in-ten voters say U.S. military intervention in Syria is not worth fighting or risking American lives.

Bush, according to Rogin, also said his biggest regret as president from 2001 to 2008 was not passing an amnesty for the 11 to 22 million illegal aliens living in the U.S., seemingly attacking the Trump administration’s focus on enforcement of immigration law that has helped boost wages for blue-collar and working-class Americans.

“We are a nation of immigrants but the language coming out of the system today is rejecting immigration,” Bush said.

During his two terms in office, Bush’s immigration platform centered on his “any willing worker” policy that declared all foreign nationals were welcome to come to the U.S. so long as they took American jobs, which were already scarce during the Great Recession and the aftermath of natural disasters like Hurricane Katrina and Hurricane Rita.

Bush’s continued attacks on Trump and his “America First” agenda stand in contrast to the former president’s history of refusing to denounce the far-left policies of Obama.

“I don’t think it’s good for the country to have a former president undermine a current president,” Bush said in 2014. “I think it’s bad for the presidency for that matter.”