The mayor of Barcelona appealed to his city to disband protests on the fifth consecutive night, as Catalan separatists continued to clash with police over the country’s Supreme Court decision handing down heavy prison sentences for nine of the independence campaign’s organizers.

“This cannot continue. Barcelona does not deserve it,” Mayor Ada Colau told reporters, adding that Friday protests — which also drew over a half a million pro-independence supporters to Spain’s capital, Madrid— was the most violent. 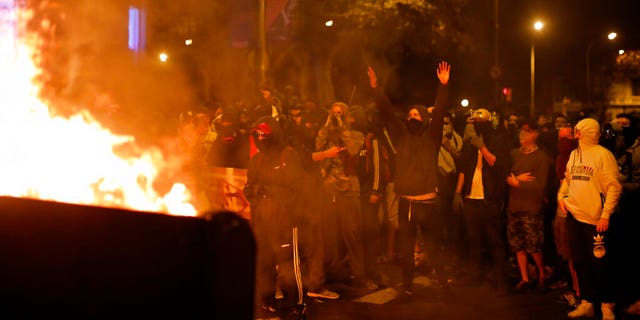 More than 500 people have been reported injured over the five days of demonstrations– 18 remain hospitalized with serious injuries– and nearly 150 have been arrested, but police have not been able to quell the violence. Rioters burned hundreds of trash bins and hurled gasoline bombs, chunks of pavement, acid, and firecrackers, among other objects, at police. They have used nails to puncture the tires of police vans and fireworks to hit one police helicopter, but no serious damage was reported. 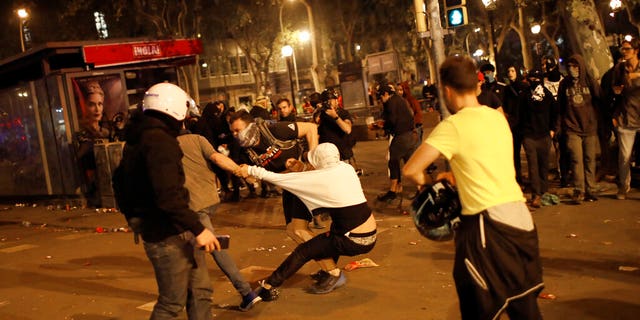 Pro-independence supporters scuffle with rioters trying to set up barricades on the street near a pro-independence demonstration in Barcelona, Spain, Saturday, Oct. 19, 2019. Radical separatists have clashed with police each night in Barcelona and other Catalan cities following huge peaceful protests of people angered by Monday’s Supreme Court verdict that sentenced nine separatist leaders to prison. (AP Photo/Emilio Morenatti)

Catalonia’s regional police and Spain’s national police fought back using batons, rubber and foam bullets, tear gas and water cannons. At least 101 police officers were injured in Friday’s riots alone, and 264 police vehicles have been damaged throughout the week, according to Spanish Interior Minister Fernando Grande-Marlaska.

“The images of organized violence during the night in Barcelona have overshadowed the half a million people who demonstrated in a peaceful and civic manner to show they rejected the verdict,” Catalan interior chief Miquel Buch, who oversees the regional police said. 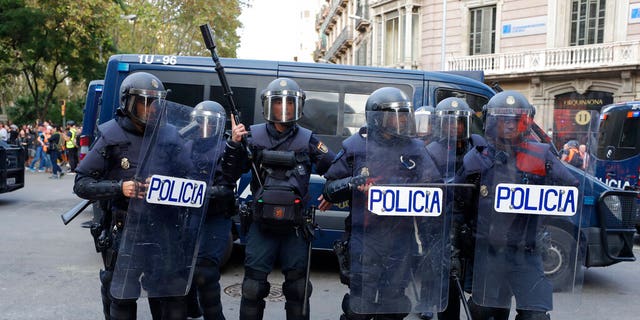 Riot police get ready in Barcelona, Spain, Saturday, Oct. 19, 2019. Barcelona and the rest of the restive Spanish region of Catalonia are reeling from five straight days of violent protests for the sentencing of 12 separatist leaders to lengthy prison sentences.The riots have broken out at nightfall following huge peaceful protests each day since Monday’s Supreme Court verdict. (AP Photo/Manu Fernandez)

“We have gone five days in which there has not been a firm condemnation of violence” by Catalan leader Quim Torra, Grande-Marlaska said.

The violence was spurred on the nearly two year anniversary of the upsurge against police as Catalonian separatists attempted to go to the polls and vote in a referendum on whether or not to secede from Spain. On Monday, nine of the 12 outspoken advocates for succession that were sentenced were given jail time of 13 to nine years behind bars.