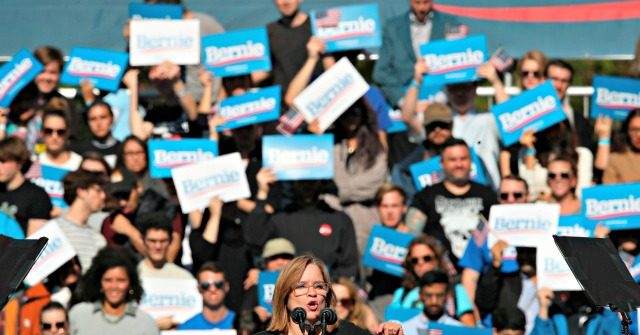 3000 Puerto Ricans did not open their eyes this morning because of a president who was too concerned about looking good, rather than doing good. We are not going to spend too much time talking about a racist, demagogue, xenophobic, paper-throwing, president.

The mayor’s mention of President Trump prompted many Sanders supporters to chant “Lock Him Up” — a play on the “Lock Her Up” slogan synonymous with failed presidential candidate Hillary Clinton.

“You know what? Let’s vote him out,” Cruz responded to attendees, before leading a “Vote Him Out” chant.

Cruz has repeatedly criticized President Trump’s response to Hurricane Maria, which killed 3,057 people across the U.S. Virgin Islands and Puerto Rico in September 2017. Yet, it is Cruz and other members of her administration that are under investigation by the FBI for allegedly keeping supplies from reaching the victims.

The “Bernie’s Back “rally marked the Sanders campaign’s first rally since the 78-year-old suffered a heart attack two weeks ago.

Storming past questions about his health, Sanders vowed that he’s “more ready than ever” to fight for a political revolution — with a little help from new friends — at his rally that drew thousands to a New York City park. The rally offered a pointed reminder to skeptics in both political parties that the democratic socialist is still very much a force in the presidential race.

Sanders opened his remarks by apologizing that he secured a permit for only 20,000 people. His campaign, he said, was forced to close the gates on many more people who were trying to enter the Queens park just across the river from Manhattan.

“To put it bluntly, I am back,” Sanders declared, sparking chants of, “Bernie is back” from the massive crowd.

The event marked Sanders’ formal return to the campaign trail less than three weeks after he suffered a heart attack that threatened both his life and political future. Even before that, he was in danger of falling out of the top-tier in the 2020 Democratic primary field. Polls suggest he’s lagging behind liberal rival Sen. Elizabeth Warren (D-MA) and establishment favorite former Vice President Joe Biden.