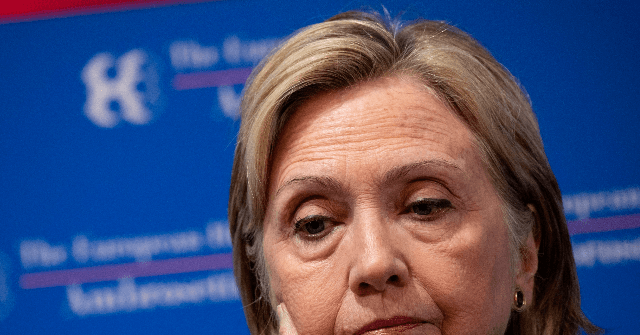 Failed presidential candidate Hillary Clinton decried the Democratic National Committee (DNC) as a “bankrupt” organization and warned that Democrats are going to be “outgunned, outspent, and out-lied” in the upcoming election, according to audio posted by the GOP War Room on Friday.

Clinton has issued a plethora of excuses for her historic loss in 2016 – from the Russians to misogyny, to “fake news,” a term conservative media managed to hijack – and appeared to offer another excuse for her defeat, decrying the DNC as a “bankrupt organization” compared to the “well-funded, well-prepared” Republican National Committee (RNC) that then-candidate Donald Trump inherited.

“And you know as well as anybody that you get the nomination when you’re Democrat, and then you basically have to get a game plan for the general election,” she said, according to audio posted by the GOP War Room on Friday:

“The day he got the nomination, having done nothing for Republicans his entire campaign, was a day that he already– there already were, you know, like 21 offices in Florida,” Clinton continued.

She warned that the Democrat nominee, whoever that may be, will likely face a similar uphill battle due to the DNC’s shortfalls.

“I had to do all of that. There was nothing. I had nothing. So from my perspective, I think we’ll be a little better off than we were back then,” she said. “But we’re gonna be outgunned, outspent, out-lied.”

“I mean, we’re gonna have a lot of problems,” she added.

Meanwhile, the RNC is outraising the DNC by millions, raising $27.3 million in September.

The RNC’s fundraising haul in September is the highest amount for an “off-cycle month” ever raised by the GOP and Democrat National Committee (DNC), notes the news outlet. The RNC, which had $59.2 million in cash on hand last month, has more than doubled the DNC fundraising in the current cycle, the political committee said.

“While Democrats focus on fighting President Trump, Republicans have prioritized voters and we have another record-breaking fundraising month—the highest ever off-cycle—to show for it,” RNC chairwoman Ronna McDaniel told Fox News.