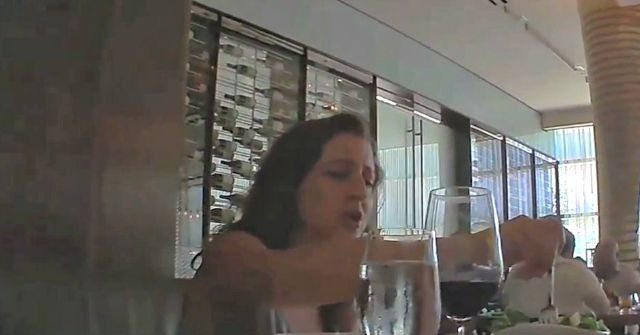 This week in the civil trial of Planned Parenthood v. Center for Medical Progress (CMP), the jury for the first time viewed a clip of the initial CMP video featuring Dr. Deborah Nucatola, eating salad and drinking wine as she appeared to be discussing how she performs abortions in order to harvest the best unborn baby body parts.

As a result of CMP’s video series that purports to show Planned Parenthood’s involvement in the illegal sale of the body parts of aborted babies, the abortion industry giant brought a lawsuit against the pro-life activists at CMP, accusing them of violating the Federal Racketeer Influenced Corrupt Organizations Act (RICO).

As the trial proceeds in U.S. District Court for the Northern District of California in San Francisco, CMP project lead David Daleiden has been posting daily summaries of the trial at CMP’s website. He wrote regarding the jury’s first viewing of a clip from the video, released in July 2015, featuring Nucatola, former Medical Director for Planned Parenthood Federation of America (PPFA):

For the first time in open court, the Defense played for the jury approximately 4 and a half minutes of Dr. Nucatola’s conversation with CMP undercover investigators at a public restaurant in Los Angeles, in which she described using ultrasound guidance to flip a baby in the womb to feet-first breech position, in order to extract the baby intact and harvest whole, fresh organs. On the clip, Dr. Nucatola states, “We’ve been pretty successful with that, I’d say.”

Dr. Nucatola testified under oath that when this video was released in 2015, she “felt the content was no big deal” and that she didn’t think she said anything inappropriate on the video.

At issue during the trial are reported inconsistencies in Nucatola’s statements, including concerning the vetting procedures for vendors at the National Abortion Federation (NAF) conferences. Daleiden and his CMP colleagues were able to gain access to Planned Parenthood officials, abortionists, and biomedical procurement executives to conduct their undercover videos at NAF conferences when they posed as representatives from the fictitious “BioMax” biomedical company.

Dr. Nucatola also testified that she relied on the National Abortion Federation’s alleged “vetting” of conference exhibitors to engage with CMP undercover actors representing BioMax Procurement Services, because she believed NAF was the “gold standard” for security in the abortion industry. However, Dr. Nucatola testified that to this day she has no knowledge of what if anything NAF actually does to “vet” exhibitors at its trade shows.

According to a report at pro-life organization Live Action:

Nucatola took the stand and admitted she didn’t know the vetting procedures for exhibitors at the National Abortion Federation conferences. According to Pro-life San Francisco’s [Terrisa] Bukovinac, Nucatola also stated she could see the people at other tables near her during her lunch with Daleiden when she spoke of fetal tissue procurement and that “they could have heard what I was saying at the time.” She also said that she didn’t share “confidential information” during the meeting. She said she did nothing wrong.

Nucatola also testified, according to the report, that, after CMP released its video of her lunch with Daleiden, she received a threatening voicemail and grew worried for her family’s safety. Subsequently, she screened her phone messages and hired an armed bodyguard at various times for the next six months.

“She also admitted that she has never kept her identity as an abortionist a secret and said she commits 50 to 500 abortions a month up to 24 weeks — or after, if necessary,” Live Action noted.

Bukovinac told Live Action that, at one point, defense attorney Paul Jonna reportedly brought to the attention of the court an email thread between Nucatola and Melissa Farrell, research director for Planned Parenthood Gulf Coast. In the email, Farrell reportedly said she was suspicious Daleiden “was a fraud who could ‘put affiliates at risk,’ but Nucatola said that he could be trusted.”

The Live Action report continued on the point of Nucatola’s previous statements regarding the effect of the video on her:

Jonna played a video of Nucatola’s deposition from March in which she testified that Daleiden should be held responsible “to those they damaged.” But when asked if she wanted Daleiden and the other defendants to be held responsible to her, she smiled and said, “They didn’t damage me.” These contradictory claims caused her to be impeached as a witness, her credibility lost, because in her deposition she testified to not having been damaged by the investigation, but in the trial stated that she and her family were damaged by it. She tried to spin it, said Bukovinac, by stating that she meant they didn’t damage her spirit.

“Nucatola was supposed to be Planned Parenthood’s star witness,” Sullenger continued. “That moment may have provided a turning point for the defense.”

Planned Parenthood initially sought over $20 million in damages in the case, but those damages have since been reduced to several hundred thousands of dollars, in addition to legal and attorney fees, which could yet run into millions of dollars.

In a separate criminal case against Daleiden and his CMP colleague Sandra Merritt, they are the first undercover journalists to be criminally prosecuted in the history of the state of California.