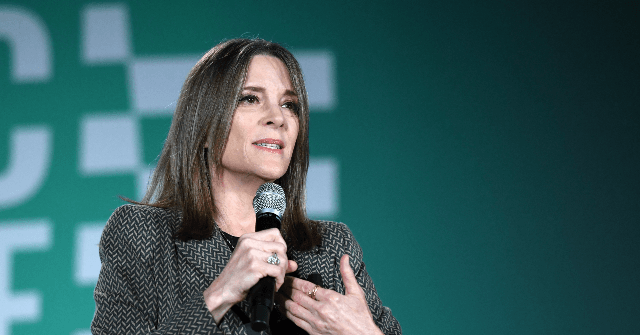 “The Democratic establishment has got to stop smearing women it finds inconvenient! The character assassination of women who don’t toe the party line will backfire,” Williamson wrote on Twitter. “Stay strong @TulsiGabbard . You deserve respect and you have mine.”

The Democratic establishment has got to stop smearing women it finds inconvenient! The character assassination of women who don’t toe the party line will backfire. Stay strong @TulsiGabbard . You deserve respect and you have mine.

Williamson is only the second Democrat presidential candidate to express support for Gabbard. On Friday, Andrew Yang responded to Clinton’s bizarre attack on Gabbard by stating the military combat veteran “deserves much more respect and thanks than this.”

“She literally just got back from serving our country abroad,” he added.

Earlier Friday, Clinton trashed Gabbard as “the favorite of the Russians,” who was being “groomed” by the Kremlin as a potential third-party candidate.

[Russia] has a bunch of sites and bots and other ways of supporting [Gabbard] so far. That’s assuming Jill Stein will give it up, which she might not because she is also a Russian asset.

They know they can’t win without a third-party candidate, and so I do not know who it’s going to be, but I can guarantee you they will have a vigorous third-party challenge in the key states that they most need it.

Hours later, Gabbard hit back at Clinton in a series of tweets, labeling her the “queen of warmongers” and the culprit behind a New York Times hit piece prior to Tuesday’s Democrat presidential debate:

… concerted campaign to destroy my reputation. We wondered who was behind it and why. Now we know — it was always you, through your proxies and …

… powerful allies in the corporate media and war machine, afraid of the threat I pose.

It’s now clear that this primary is between you and me. Don’t cowardly hide behind your proxies. Join the race directly.

“[Clinton] finally came out from behind the curtain yesterday, accusing me of being a Russian asset,” a fundraising email to supporters read.

“If this is a fight she wants to have, one that has implications for all of us and the future of our democracy, then I challenge her to come out from behind her proxies and powerful allies in the corporate media, and face me directly,” it concluded.