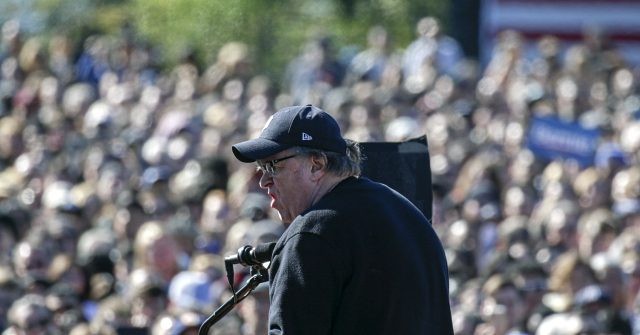 Anti-Trump documentary filmmaker Michael Moore said at the “Bernie’s Back Rally” in New York on Saturday that he is “glad” that the socialist presidential hopeful is 78-years-old and added that it is the Electoral College — not Sen. Bernie Sanders (I-VT) — that is old and outdated.

Michael Moore addressed some of the common critiques of Sanders — most specifically, that he is “too old” and unhealthy to be president. Moore dismissed both arguments, declaring that he is “glad” that Sanders is 78 and calling the Electoral College “too old.”

“I’m glad he’s 78, and we will benefit for his wisdom and his experience and his knowledge and his love for the American people,” Moore said.

“It’s actually a gift that we have a 78-year-old American running for President of the United States,” Moore continued, addressing what he believes is really “too old” in the country.

“Thousands and thouands of dollars in student debt. What is that?” he asked, to which the crowd shouted, “too old!”

“How about we talk about the health of this planet that’s dying. That’s the health I care about,” Moore said, later chanting, “Green New Deal!”