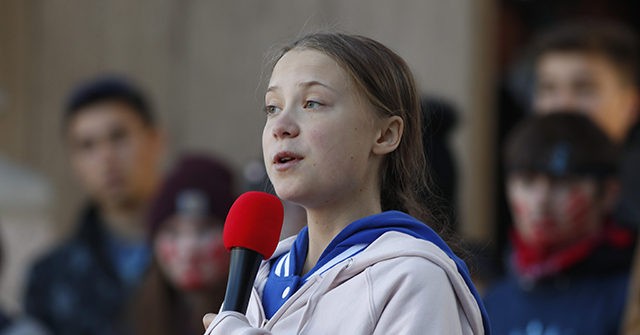 Thousands of young people who have bought into the United Nations’ and other manmade climate change believers’ prediction that the world is on the verge of extinction gathered in Alberta, Canada, on Friday to support the ongoing climate strikes launched by 16-year-old Swedish activist Greta Thunberg.

But this time there were counter-protesters representing the massive number of men and women who work in the country’s oil and natural gas industry, and whose jobs depend on the infrastructure that powers Canada and countries around the globe.

“We care for the environment, of course we do,” a counter-protester said in a Daily Mail report. “What they need to understand is that we’re hurting and we also need to care about Alberta jobs.”

The Daily Mail report revealed how Thunberg’s and other activist’s ideas to completely transform the world’s energy infrastructure would hurt real people more than it would help the environment:

The honking horns of big rig trucks blared from a nearby thoroughfare, where vehicles emblazoned with ‘We love Canada energy’ signs were driving up and down.

“When they charged their iPhones last night, that power came from this plant,” he said, pointing to the former coal-fired Keephills power plant near Edmonton that was being converted to natural gas.

The Daily Mail reported that protesters were led by “indigenous drummers” and held signs with slogans, including “Be a Better Ancestor.”

“We cannot allow this crisis to continue to be a partisan, political question,” Thunberg said at the protest. “The climate and ecological crisis is far beyond party politics and the main enemy right now should not be any political opponents, because our main enemy is physics.”

While Thunberg’s Fridays for Future movement calls for kids to cut classes every Friday to protest, the teen is taking months off from school to support demonstrations in the United States and Canada. She also plans to travel to Chile in December for another United Nations climate summit.

Thunberg came to the United States in August traveling from Europe to New York City on a state-of-the-art racing yacht that is solar- and wind-powered.

But her carbon-free trip has been criticized because the yacht’s crew flew by plane back and forth as part of the logistics for the journey, making a much greater “carbon footprint” than one girl traveling by plane would make.

As Breitbart News reported, Thunberg traveled to Canada in Terminator Arnold Schwarzenegger’s electric vehicle for the trip north from the United States.

It’s unclear how Thunberg will travel to South America.

“Alberta is home to Canada’s vast oil sands and holds the world’s third-largest crude reserves, but has struggled to recover from the 2014-15 global oil price crash because of delays building new export pipelines as a result of environmental opposition and regulatory hold-ups,” the Daily Mail reported. “Many energy sector workers and the Alberta government feel the oil sands, scorned by environmentalists for their high carbon emissions intensity, have been unfairly targeted and say the sector is making progress cutting greenhouse gas output.”