The Houston Astros are moving on to the World Series after eliminating the New York Yankees with a 6-4 victory Saturday night in Houston in Game 6 of the American League Championship Series.

Houston’s Jose Altuve won the game with a two-run home run in the bottom of the ninth inning after New York’s D.J. LaMahieu tied the game with a home run of his own in the top of the frame.

The Astros, who won the World Series in 2017, will play the Washington Nationals, who recently eliminated the St. Louis Cardinals to win the National League pennant. 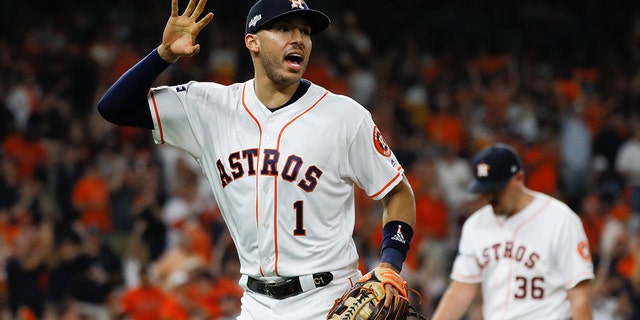 Houston Astros shortstop Carlos Correa celebrates after the end of the top of the sixth inning in Game 6 of baseball’s American League Championship Series against the New York Yankees, Oct. 19, 2019, in Houston. (Associated Press)

Game 6 was not without controversy. In the second inning, Yankees hitter Brett Gardner had two strikes called against him by home plate umpire Marvin Hudson that appeared questionable on replays. The Yankees had two runners on base at the time, with two outs and Houston leading 3-1.

In the seventh inning, Houston outfielder Michael Brantley made a diving catch in left field and turned it into a double play by catching New York’s Aaron Judge, who was too far off first base.

Houston had a chance to end the game in the top of the ninth, but New York’s LaMahieu smacked a two-run home run to tie the game.

This is a developing story. Check back for updates.