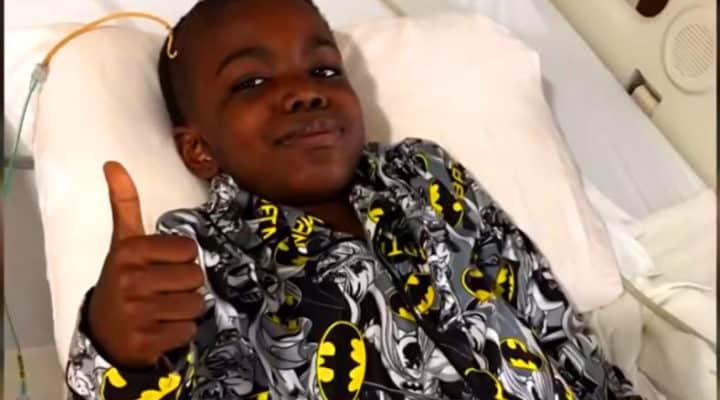 An 8-year-old boy is being called a superhero after beating stage 4 brain cancer with the help of St. Jude.

Cameron Scott had a high-risk tumor that spread to his spine diagnosed as medullobastoma.

As part of TODAY’s “Thanks and Giving” series, that highlights the lifesaving work of St. Jude, Cameron and his family shared their story.

“I feel amazing now,” Cameron told Sanders. “I feel like I’ve been through everything.”

“It was like an out-of-body experience,” his mother, Tamika Scott, told Sanders. “They initially showed us the back and his spine, and the doctor looking at the pictures turned to the other doctors and said, ‘I need another MRI. I need you to scan upward.”’

Cameron underwent surgery to remove the tumors and was then sent to St. Jude for follow-up treatments. It was there where St. Jude pioneered gene sequencing of Cameron’s cancer and allowed them to prescribe a targeted treatment. Doctors soon discovered Cameron had not one disease but he actually had four.

The eight-year-old underwent six months of radiation and chemotherapy.

According to NBC News, the entire process was financially paid for by St. Jude.