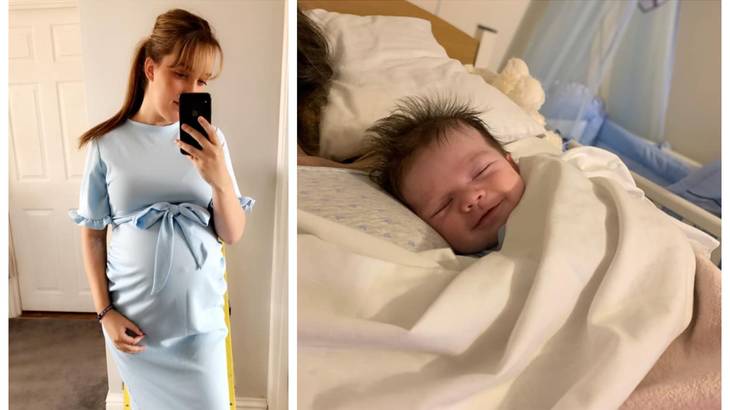 Praying for this little baby.

They say a picture is worth a thousand words, but this might not begin to cover it in a recent story from Hampshire, England. Several of a new mother’s snapshots, seen cuddling her newborn son, go online this week. But the explanation is both tragic and heartbreaking: just hours after the daughter, Teegan Barnard, was pronounced brain dead— just minutes before she passed away, they were removed.

On September 7, when Barnard gave birth to her son Parker, the young mother was not expecting complications from her doctors.

During her pregnancy, the 17-year-old mother suffered from internal bleeding, which resulted in her going into cardiac arrest. Her doctors at St. Richard’s Hospital attempted to perform CPR, but there was not much they could do and she was left with severe brain damage.

The new grandmother said she took the photos so that her grandson could see them when he gets older.

“Seeing Parker in his mommy’s arms where he belongs has been so important to me,” she explained. “I put them together at every possible moment.”

Teegan passed away from this world peacefully Oct. 7 while at home, surrounded by family and friends.

“Now she has gone, we dress Parker in vests with his mum’s picture on,” Hallawell said. “I want to keep her close to him always.”

Understandably, the trauma of Teegan’s sudden death, particularly at such a young age, has hit her family hard.

“We are all in terrible shock. I just want Teegan back,” her mother said. “I didn’t realize my heart could break into a million pieces. I’ll never be the same again.”

The grandmother said she and Leon Forster, the father of the child, would raise Parker.

Now, she can’t help but feel so badly about her daughter.

“She was so looking forward to being a mummy. She was so excited,” Hallawell said. “I think people got fed up with us talking about it all the time. She had so much love for him and didn’t even get to show him.”

Hallawell added that she and her daughter, who were just 18 years apart, were more like “best friends” than mother and daughter.

“I miss her so much, it’s unbearable,” she continued. “I can’t imagine the future without her, not hearing her beautiful voice again.”

A fundraiser has been set up to help the family of Teegan, but the grandmother is heartbroken that her daughter will not be around to see her son grow up.

“I am so proud of Teegan and Parker. I just wish so much she was here to see it for herself,” she said.