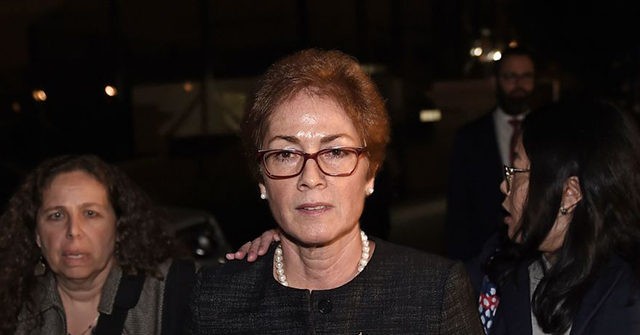 Former U.S. Ambassador to Ukraine Marie Yovanovitch, who was fired by President Donald Trump in May, misled lawmakers in her testimony she gave as part of House Democrats’ impeachment probe, according to a report.

Yovanovitch testified behind closed doors on October 11 that in mid-August, a Democrat House Foreign Affairs Committee staffer had reached out to her on her personal email with a request to come and talk to the committee about the circumstances of her departure.

She claimed that she received the email and alerted the State Department.

When asked specifically what the staffer wanted to talk about, she said, “I think I think it was the circumstances of my departure, or maybe she just kept it more general and said to catch up, but I understood it as that.”

Fox News’s Tucker Carlson got a hold of the staffer’s email to Yovanovitch — and her reply.

The staffer’s email said, “I’m writing to see if you would have time to meet up for a chat — in particular, I’m hoping to discuss some Ukraine-related oversight questions we are exploring. I’d appreciate the chance to ground-truth a few pieces of information with you, some of which are quite delicate/time-sensitive and, thus, we want to make sure we get them right.”

Contrary to what she implied to lawmakers, Yovanovitch actually did respond to the staffer, saying that she looked “forward to chatting with you.”

Carlson also revealed that the staffer sent the email on August 14, 2019 — just two days after the “whistleblower” complaint was filed and before the public was aware it existed.

Carlson asked, “The question is, did Schiff’s office tell other Democrats on Capitol Hill what was in the complaint? In other words, how long did this effort play out in secret before the rest of the country learned of it?”

Shortly after the outreach to Yovanovitch was made through her personal email, the New York Times reported on August 21, 2019, that Rudy Giuliani had “renewed his push for the Ukrainian government to pursue investigations into political opponents” of Trump.

On September 9, 2019, Democrat chairmen of the House Foreign Affairs, Intelligence, and Oversight Committees launched a “wide-ranging” investigation into “reported efforts by President Trump, the President’s personal lawyer Rudy Giuliani, and possibly others to pressure the government of Ukraine to assist the President’s reelection campaign.” They cited the Times report.

The Trump administration released the “whistleblower” complaint on September 26, 2019.

It was later reported by the New York Times that the “whistleblower” went to Schiff’s office before filing the complaint on August 12, 2019. The paper reported that Schiff’s staff passed on the “outlines” of the “whistleblower’s” concern and instructed him to get legal representation and file a formal complaint with the intelligence community inspector general.

A spokesperson for the House Foreign Affairs Committee’s Democrat members told Fox News, “The Committee wanted to hear from an ambassador whose assignment was cut short under unusual circumstances. This staff outreach was part of a months-long effort that culminated in the September 9 launch of an investigation into these events.”