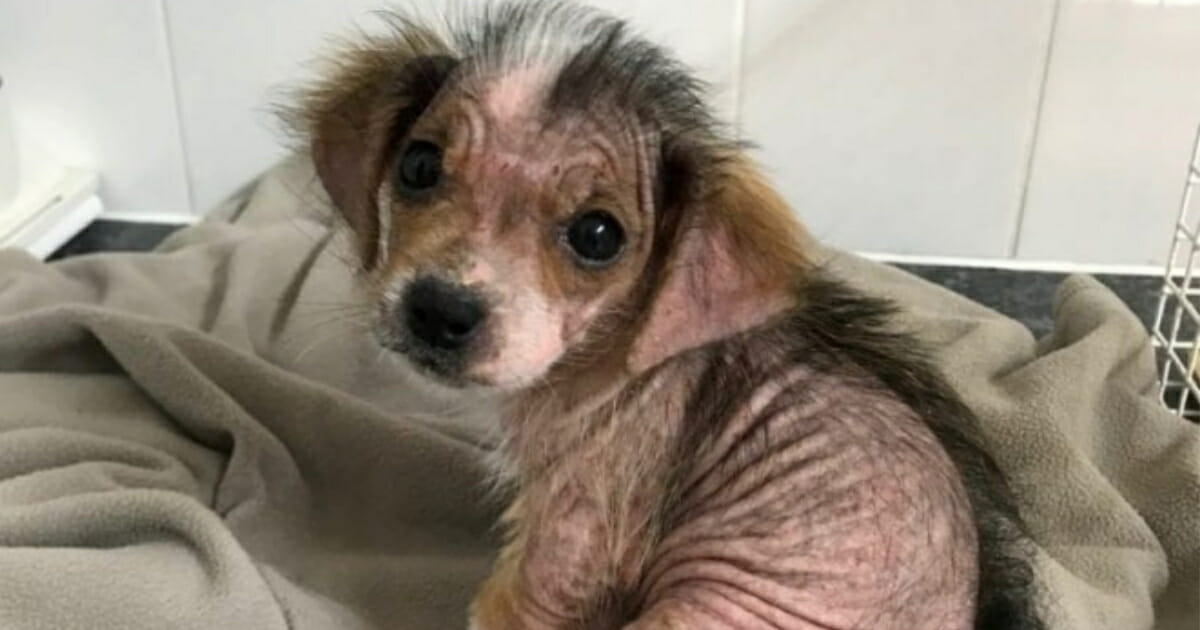 Any animal lover may find it difficult to resist a puppy’s cute, innocent eyes— especially a puppy who has not been given a safe and loving start to life.

Jessie DeFreitas, 21, has four cats to look after and a rescue dog.

But the moment she laid eyes on a young, unwanted puppy brought to the veterinarian’s office where she was working, her heart opened wide, realizing she was also able to take care of this puppy.

The little girl had a serious mange outbreak, so much so that her head and body were covered only by a skunk-like strip of fur.

The dog, whose former owners named her Honey, seemed pitiful. She was clearly in pain and in need of proper care urgently.

“When I was told we had a new dog, I had to see her. She may have had mange, but she had beautiful eyes,” DeFreitas told the U.K.’s Southwest News Service, as Fox News reported. “The vet said if the dog wasn’t signed over to them, she wouldn’t have survived.”

DeFreitas, who lives in West Sussex in the U.K., was aware that bringing the desperate puppy home would be a lot of work, but it would be completely worth it in the long run.

“She needed constant care. I asked to foster the dog,” DeFreitas said. “My mum asked if I was sure because we already have four cats and another rescue dog at home. But everyone knows I love animals. At the vets I’m constantly asking about people’s pets.”

As DeFreitas began to get a better feel for Honey, she quickly realized that her sticky-sweet name didn’t fit the puppy’s personality.

“When we first brought her home, she was a playful biter. Her original name, Honey, didn’t fit her at all,” DeFreitas said. “To me, honey is sweet and she is not.”

Instead, the frisky pup seemed to act like more of a tornado, with razor-sharp, nippy puppy bites and a habit for making a mess of everything, as all puppies do.

“My mum named her Terra with an ‘a’ because it fit her better — she can be a little terror,” DeFreitas said.

But as the days rolled by, under watchful eyes and compassionate care, the little tornado began to calm down. As her body healed, so did her spirit.

“She’s recovered really well. You can see it in her eyes — she’s become happier and happier,” DeFreitas said.

Her name is not Honey any longer, but the little pup has found her sweet side after all.