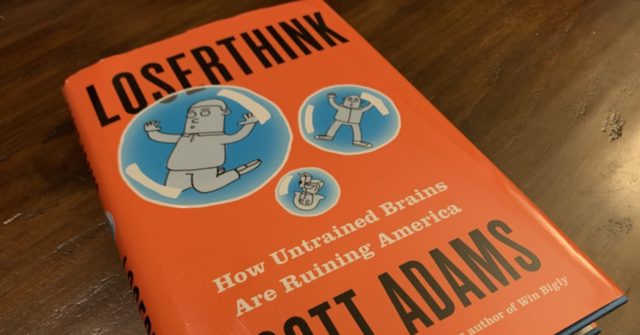 Scott Adams, the Dilbert cartoonist who famously predicted in 2015 that President Donald Trump could win the presidency, is out with a new book Tuesday: Loserthink: How Untrained Brains are Ruining America.

It is the sequel to Adams’s bestselling Win Bigly (2017), which taught readers how to use some of the same persuasion techniques Trump used to great effect.

In Loserthink, Adams goes beyond persuasion: he wants to save the world.

Accordingly, Adams is asking those who purchase the book to pitch in: when they encounter a fallacious argument, he advises, they should simply take a photograph of the page in Loserthink where he addresses that particular idea, and tweet it in response.

That way, he says, not only will readers promote his book, and win arguments by looking more authoritative, but they will also share some of the insight that he hopes will, over time, make people happier.

“Loserthink,” Adams explains, is not exclusive to “losers.” We all do it. It is a way of looking at the world from inside familiar bubbles, such that set ourselves up to fail.

The problem is not that we lack the facts necessary to understand our reality: that, he explained in Win Bigly, is just part of the way we are wired. Rather, the problem is that the way we train ourselves to think tends to work well inside certain disciplines, but not others.

For example, he notes, it is common that Hollywood stars, many of whom are exceptionally talented and highly trained, fail to understand politics. The worst part is that they don’t know they fail: they act as though their opinions are the only correct ones.

That is partly the result of conformity: few conservatives dare to come out of the closet in Hollywood. But it is also a result of loserthink: they assume their expertise in one area carries across to another.

Likewise with climate science, Adams says. To journalists, and even to many scientists, the familiar graphs that predict global warming far out into the future seem convincing.

But to anyone with experience in the corporate world, Adams says, those graphs look like every phone economic projection ever used to sell an idea. That does not mean climate change is a fraud. What it means is that it is being sold as a fraud, which is why many people doubt it.

The problem is that most people who believe in climate change are trapped in loserthink bubbles. (So, too, he says, are some of the climate skeptics.) Thinking narrowly does not make you a “loser,” but it means you are less likely to succeed.

In the climate change example, that means you are less likely to persuade others, or you will adopt policies that make everyone miserable without solving the prolem. (See, e.g., California, if you have electricity today.)

Some of the material in Loserthink will be familiar to fans of Adams’s daily Periscope broadcasts, which attract thousands of people, including White House staffers and celebrities. The book compiles several years’ worth of examples of bad arguments. They are as entertaining as ever. Adams takes a risk by using the climate change example early in the book, which risks alienating those with strong opinions on the issue, who may be encountering his writing for the first time. Then again, there is something in Loserthink to shock everyone — which is his point.

Adams hopes that by encouraging his readers — and those they encounter online — to familiarize themselves with new ways of thinking, from different disciplines, he will help break down the divisions that have emerged in our society, and which make us all unhappy.

Break out of your “mental prisons,” he says. Loserthink may be the key.