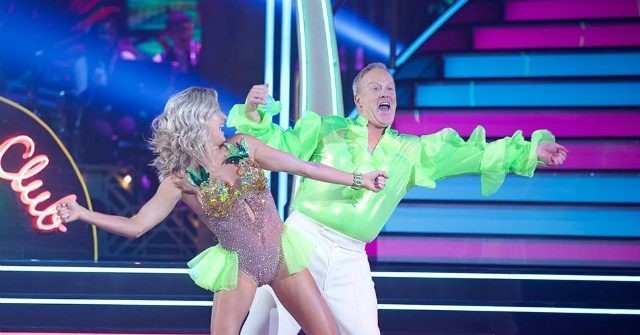 Former White House press secretary and current Dancing with the Stars contestant Sean Spicer credited conservatives across the nation, including listeners and readers of Breitbart News, for sustaining his run on the show.

Spicer’s success has sent a shockwave through Hollywood, prompting remarks from elites like Hillary and Chelsea Clinton and the New York Times.

Spicer spoke to Breitbart News Sunday in what has now become a pre-DWTS ritual and stressed the significance of the overwhelming support he has seen from conservatives and Breitbart Nation, who have sent a strong message to liberal elites.

“The only reason I’m in this position is because of the votes out there,” Spicer said. “People you know throughout your viewership, your readership, your listenership that are out there saying, ‘Hey we want to have fun,’ because that’s what’s carrying me through. It’s certainly not my scores from the judges.”

Ally Brooke, whom Spicer described as a “phenomenal person and dancer” got straight tens from the judges last week yet found herself in the bottom two. Spicer, who garnered the lowest judges’ scores, was safe. That, as Spicer notes, speaks volumes.

“And yet I have never through nine weeks ever been in the bottom two, and that means if you just look at it mathematically that, somehow, I’m getting such a disproportionate viewer score of the votes that that’s outweighing my lower scores from the judges,” he said. “That tells you everything.”

Spicer’s stay in the show last week sent a shockwave through Hollywood, prompting more than a few angry responses on social media. Twitter erupted with angry replies and inspired hit pieces from the establishment media outlets, including the New York Times. The outlet featured a piece titled “No, Sean Spicer Really Can’t Dance,” which bizarrely described the former White House official as “an untruthful dancer.”

“They literally called my dancing ‘untruthful,’ which I don’t understand,” Spicer remarked. “It might be bad, but I don’t know how dancing can tell the truth or lie. I don’t think that’s really an attribute you can ascribe to that.”

At the end of the day, Spicer believes people – not necessarily just conservatives – “love the idea of a guy” out there competing and making progress.

“I think that upsets some folks,” he said, mentioning the Clintons.

“I can’t blame Trump for trying to help Sean Spicer,” the twice-failed presidential candidate said during a bit with James Corden on The Late Late Show. “But if there’s one thing we’ve learned, it’s that these guys really can’t win the popular vote.”

“Former White House spokesman Sean Spicer is now on Dancing With the Stars,” Chelsea Clinton added. “It’s an improvement from his old job, ‘Dancing around the issues.’”

“Hillary Clinton literally came out, and Chelsea Clinton as wel,l about how wrong this is. It’s like, wait a second. Are you serious? That – this what we’re spending our time commenting on?” Spicer said.

Spicer also talked about the president’s support, expressing his endless gratitude and pointing out that Trump’s willingness to support him busts another massive left-wing narrative.

“I always hear these narratives about President Trump’s not loyal to his folks and whatever. Look – not that he has to tweet for or against me or anything like that – but the idea that he knows that I did my best for him, and that he’s willing to go out of his way to continue to show that, it really does mean a lot to me,” Spicer said.

“He’s the president of the United States. He’s the leader of the free world. He’s got a lot going on, but he does care about his people, and he cares about the people who served him and that want him to succeed, and I really do appreciate him taking the time to do that,” he continued.

Spicer reminded listeners that his presence on the show has been about “more than just me. It’s about we,” and mentioned the military charities that his “campaign” has been supporting throughout the show.

The proceeds from his campaign merchandise, found on SpicerArnold.com, go to the Independence Fund, which provides track wheelchairs for veterans with mobility issues as well as the Yellow Ribbon Fund, which supports caregivers of wounded vets.

Stakes are high this week, as the competition continues to narrow, increasing the chances of dancers finding themselves in a vulnerable position. Viewer support, however, can be a massive gamechanger, as Spicer can attest.

“I could potentially make it into the semifinals of a show that Vegas said I had a 50-1 shot of making it, right? I was the lowest guy by far,” he said.

“I’m not the best dancer and my scores reflect it, but because of the votes I actually have the potential to make it another round, and that just to me is unreal. I mean the idea that that’s happening blows my mind,” he added.

Viewers can vote for Spicer up to 20 times Monday night between 8-10 p.m. EST – ten by texting SEAN to 21523 and ten more times on ABC.com. All information, including the campaign merchandise which supports veterans charities, can be found on Spicer’s DWTS website, SpicerArnold.com.