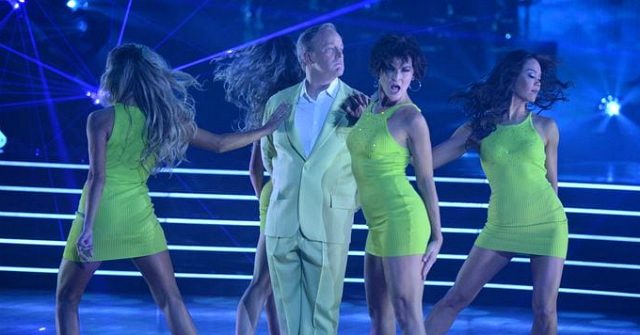 Sean Spicer performed his last dance on Dancing with the Stars Monday evening after judges booted him off after he found himself in the bottom two for the first time ever in the competition.

Spicer, whose continued presence on DWTS triggered threats of boycotts and astounded leftist Hollywood elites week after week, went home Monday evening after nearly making it into the semifinals.

The former White House press secretary’s Argentine Tango scored a 26/40 from the judges, but he landed in the bottom two for the first time ever in the competition.

The judges wield all the power in choosing which of the couples in the bottom two get to advance, and they used the opportunity to ax Spicer, which prompted some gloating.

Sean Spicer’s presence on “Dancing With the Stars” grated on 2 groups of viewers: Those unforgiving of his stint as a White House spokesman, and those who like to watch good dancing. Finally, on Monday, not even President Trump’s support could save him. https://t.co/d3jxcxu489

For Sean Spicer’s next reality show, I think he should be on a deserted island with Meghan McCain, Laura Ingraham, and Eric Trump. That’s it. No cameras. Just stay on a fucking deserted island so no one has to hear from these motherfuckers again.

Because on realty television, the popular vote matters. https://t.co/jta9CacAmm

Sean Spicer was voted off #DWTS or as Sean Spicer would describe it, he won the whole thing.

Donald Trump deleted his tweet urging people to vote for Sean Spicer after he was eliminated from Dancing with the Stars. 😂😂😂 pic.twitter.com/BrHjjxsptD

President Trump took the “Dancing” competition seriously, tweeting out support for @SeanSpicer and urging the MAGA universe to cast votes for a man who has remained loyal during a perilous time for the president. But every dance party ends eventually… https://t.co/DQDdTwmh6O

Spicer has admitted that he is not the most skilled dancer and has credited conservatives across the nation, Breitbart Nation particularly, for carrying him through in the competition.

“The only reason I’m in this position is because of the votes out there,” Spicer told Breitbart News Sunday, prior to his performance. “People you know throughout your viewership, your readership, your listenership that are out there saying, ‘Hey we want to have fun,’ because that’s what’s carrying me through. It’s certainly not my scores from the judges.”

President Trump congratulated Spicer for making it as far as he did in a tweet following the show’s results.

“A great try by @seanspicer. We are all proud of you!” the president wrote.

A great try by @seanspicer. We are all proud of you!

Thank you @POTUS @realDonaldTrump I can’t begin to express how much your continued support has meant, especially during my time on @DancingABC https://t.co/1uLvApIPdp

As Spicer said from the beginning, his stay on the show was about something greater than him. It was about sending a message to elites who thought that conservatives could be canceled out.

“I think that’s a great message to send. For all of those folks on the right– that we are equal participants and we cannot be canceled out,” Spicer told Breitbart News Sunday. “Hopefully this is helping the overall movement and people realize– hey look you’re an advertiser, if you’re a show, there are a lot of active folks on the right that you should be paying attention to.”

Spicer made it much further than anyone imagined, nearly making it to the semifinals of the competition — an enormous feat for someone whose presence spurred threats of boycotts from the day of his announcement on the show.

The former White House press secretary has credited the left’s intolerant reaction to his extended stay, noting that they fired conservatives up from the get-go.

“I didn’t start this. I went on the show looking to have fun and do well, whatever. It was the left who boycotted me,” Spicer said in another appearance on Breitbart News Sunday last week.

“To everyone who has voted & supported me over the past 9 weeks on @DancingABC thank u from the bottom of my heart. I made it to the quarterfinals bc of your votes. I had a blast,” Spicer wrote. “Thank u to my family, the AMAZING @lindsayarnold – u are the best, & @JennaJohnson I appreciate u!”

To everyone who has voted & supported me over the past 9 weeks on @DancingABC thank u from the bottom of my heart. I made it to the quarterfinals bc of your votes. I had a blast. Thank u to my family, the AMAZING @lindsayarnold – u are the best, & @JennaJohnson I appreciate u!