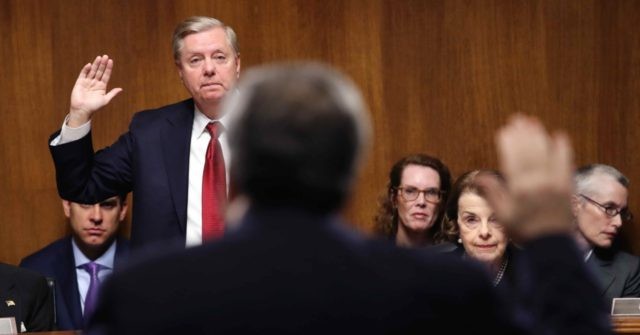 Graham added that he would not allow a trial of President Donald Trump in the Senate based on hearsay evidence alone, and without testimony from the “whistleblower.”

Graham was speaking after the close of the first day of public hearings in the House Intelligence Committee as part of the “impeachment inquiry” authorized by Democrats in a House resolution that passed on party lines October 31.

After the first two witnesses testified, Democrats on the committee voted along party lines to table a motion made by Republicans to call the “whistleblower” — who admitted having no first-hand knowledge — to testify in person.

Republicans — notably Rep. Mike Turner (R-OH) — pointed out that neither of the two witnesses would qualify to testify in court, since they only had “hearsay” evidence, i.e. they did not see or hear anything relevant themselves.

The Sixth Amendment, which guarantees the right to confront one’s accuser, excludes hearsay evidence in most circumstances — especially when the direct evidence, in this case the transcript of the telephone call between the president and President Volodymyr Zelensky of Ukraine.

Graham, as chair of the Senate Judiciary Committee, and a former impeachment manager during the trial of former President Bill Clinton, would have considerable sway over the procedural rules the Senate would adopt for Trump’s trial if the House impeaches the president.

He declared that he would bar any case against the president based on hearsay alone, suggesting the prospects of a motion to dismiss. “Any resolution setting up a trial in the Senate — I’m going to make sure that hearsay cannot be the basis of an impeachment investigation,” he said.

“If you excluded hearsay, like every other court in the land, there’s nothing there,” he added. “If you invoked the hearsay rule, what would be left?” He described impeachment based on hearsay as “a threat to the presidency itself.”

Graham added that he would require that the “whistleblower” testify.

Graham also said that Congress needed to satisfy questions about the whistleblower’s potential motivations — and whether he had a role in former Vice President Joe Biden’s conflict of interest regarding his son Hunter’s board position in a corrupt Ukrainian company, Burisma. Biden threatened to block $1 billion of U.S. aid unless Ukraine fired a prosecutor who was, theoretically at least, overseeing an investigation of the company’s corruption.

Some media reports have suggested that the whistleblower worked for Biden under the Obama administration.

Graham also vowed that House Intelligence Committee chair Rep. Adam Schiff (D-CA) would be called to testify. Ordinarily, he said, he would not call a member of the House to testify, as a matter of mere oversight, but an impeachment trial was a special case.

“One of the witnesses will be Adam Schiff because if he, in fact, did meet with the whistleblower, and coached the guy up, I think that’s relevant to the impeachment inquiry itself,” Graham said.