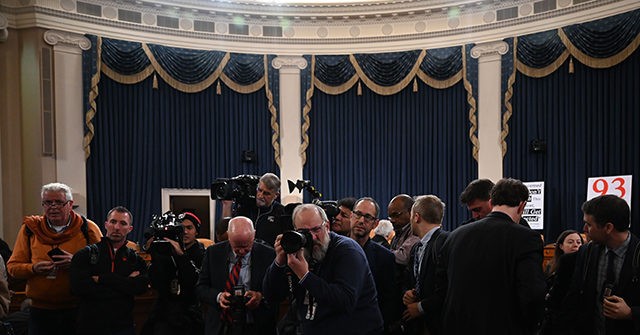 The House Intelligence Committee is holding its inaugural public hearing of the impeachment inquiry into President Donald Trump on Wednesday.

Congressional investigators will hear testimony from Acting Ambassador William Taylor, Chargé d’affairs at the U.S. embassy in Ukraine, and George Kent, Deputy Assistant Secretary in the European and Eurasian Bureau at the State Department.

**Follow live updates on this event from Breitbart News. All times in eastern.**

Kent says that over the last 5 years, the U.S. has appropriated more than $1.5 billion to Ukraine to support their efforts to fight Russian aggression.

George Kent: “They were the 21st century version of our own minutemen” Referring to the volunteer battalions that helped fight off recent Russian aggression and advancements on Ukrainian soil. #ImpeachmentHearings on @wbznewsradio

10:39 A.M. — Kent delivers his opening statement, stating: “For the past 5 years, we have focused our united efforts across the Atlantic to support Ukraine in its fight for the cause of freedom and the rebirth of a country free from Russian dominion and the warped legacy of Soviet institutions and post-Soviet behavior.”

George Kent, the deputy assistant secretary of state for European and Eurasian affairs who is a key witness in the impeachment inquiry, delivers his opening statement https://t.co/O6ybmtHEg0 pic.twitter.com/UlV2bVqNMl

Kent adds: “It was unexpected and most unfortunate…to watch some Americans, including those who allied themselves with corrupt Ukrainians in pursuit of private agendas, launch attacks on dedicated public servants. Those attacks undermined U.S. and Ukrainian national interests.”

Kent: “It was unexpected and most unfortunate…to watch some Americans, including those who allied themselves with corrupt Ukrainians in pursuit of private agendas, launch attacks on dedicated public servants.

10:29 A.M. — Rep. Elise Stefanik (R-NY) asks Schiff when he will respond to the Republicans’ request to interview witnesses.

Worth noting that Jim Jordan is seated right beside Schiff, Nunes and their counsel. It highlights the prominent role he’ll be playing today

10:27 A.M. —  Nunes slams impeachment hearings as a “televised theatrical performance,” mockingly congratulates Taylor and Kent for passing the Democrats’ “star audition process.” He then calls the hearing a “low-rent Ukrainian sequel” to the Russia hoax.

10:23 A.M. — Nunes cites Schiff falling for a prank in which he expressed interest in nude photos of President Trump, saying: “We should forget about Democrats attempting to get nude Trump pics from Russian pranksters.”

10:21 A.M. — Rep. Devin Nunes (R-CA) calls the impeachment inquiry a continuation of the “spectacular implosion of their Russian hoax.”

10:17 A.M. — Schiff falsely claims: “The facts in the present inquiry are not seriously contested.”

“Neither of these investigations were in the US national interest, and neither was part of the official preparatory material for the call. Both, however, were in Donald Trump’s personal interest,” says the California Democrat.

Ratcliffe interrupts Schiff’s opening statement to expose that there are no clear “rules of engagement.”

Schiff begins by mapping out procedure. Chair Schiff will make an opening statement, then Ranking Member Nunes. Before he can finish, Rep. Ratcliffe interrupted. Wants to know how many 45 minute rounds of questioning Schiff and Nunes will each have. Schiff said not clear yet.

10:00 A.M. — Breitbart News senior editor-at-large Joel Pollak is out with the definitive op-ed on the case against impeaching President Donald Trump.

The President’s Phone Call with the Ukrainian President Was Legal, Necessary, and Also Praiseworthy

There Was No ‘Quid Pro Quo,’ But It There Were, It Would Have Been Perfectly Legal

The President Has Not Committed Abuse of Power, Which Is Not Sufficient Cause for Impeachment Anyway

Impeachment Should Involve the Actual Commission of a Crime, Not Disputes over Policy and Opinion

The Impeachment Effort is the Result of an Attempted Coup, and the Evidence Is Fruit of a Poisoned Tree

9:57 A.M. — As always, Schiff is basking in the establishment media spotlight ahead of today’s first public impeachment hearing.