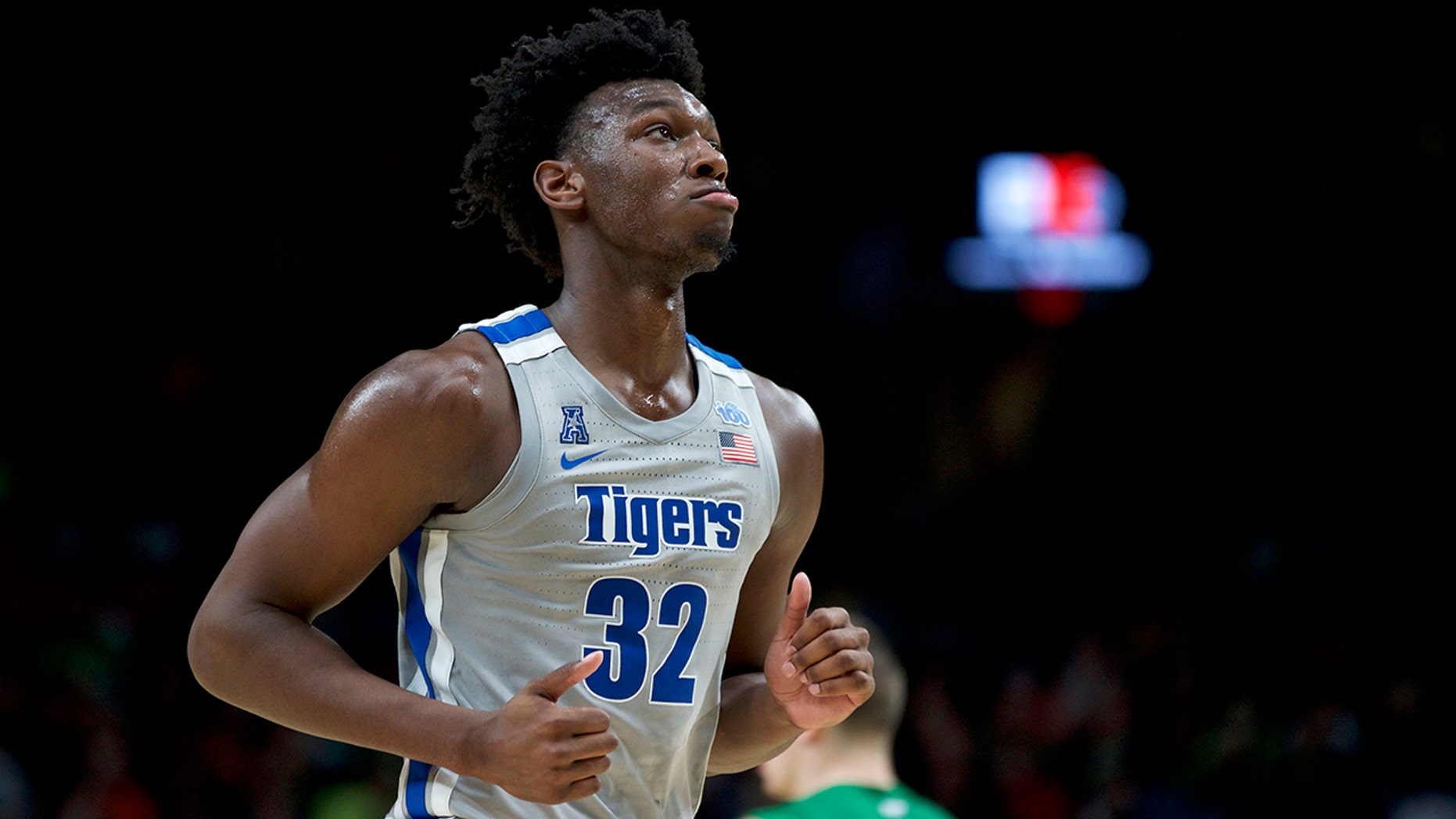 Memphis center James Wiseman runs off the court during the second half of an NCAA college basketball game against Oregon in Portland, Ore., Tuesday, Nov. 12, 2019. Oregon won 82-74. (AP Photo/Craig Mitchelldyer)

James Wiseman has one more game before heading back to court with his attorneys as they take on the NCAA in a high-stakes battle to keep the 7-foot-1 freshman playing in what could be his only year with the Memphis Tigers, one that could prove costly for the university.

The nation’s top-rated recruit has been ruled likely ineligible by the NCAA for receiving improper benefits from Penny Hardaway — before the former NBA All-Star was hired as Memphis’ coach. But Wiseman has played two games under a temporary restraining order issued after his attorneys sued college sports’ governing body.

The next step in this legal action comes Monday, two days after Memphis hosts Alcorn State on Saturday. Wiseman’s attorneys will be in a Tennessee chancery court before the same judge who granted the temporary restraining order.

This time they’ll be asking for an injunction allowing Wiseman to keep playing.

It is unclear how this will end.

Wiseman, who had 14 points and 12 rebounds against Oregon, could play the entire season as the case winds through the courts. There could be a settlement with the NCAA where Wiseman sits out a few games. Or when the dust settles, the NCAA could slap Memphis with violations, fines and sanctions for games Wiseman played in or even postseason bans.

The university is supporting his lawsuit even while named as a defendant.

Both Memphis’ President Dr. M. David Rudd and athletic director Laird Veatch have made clear Wiseman will keep playing despite the NCAA’s rare statement it believes the freshman is “likely ineligible.”

“The university chose to play him and ultimately is responsible for ensuring its student-athletes are eligible to play,” the NCAA wrote on Twitter while Wiseman played his first game under a court order.

Don Jackson, an Alabama-based attorney who has represented other student-athletes in NCAA eligibility cases, said Tuesday he’s happy to see a university decide state laws are superior to NCAA regulations. Jackson believes student-athletes are entitled to due process.

“Candidly, I’m thrilled to see this university take this approach,” Jackson said. “It would be gratifying if other universities had the guts to do the same. They don’t.”

“I’m 100% convinced there is no violation here,” Johnson said. “Backwards, forwards, upside down, however you look at it.”

Wiseman’s lawsuit states that Hardaway disclosed he gave $11,500 in moving expenses to help the player’s family move from Nashville to Memphis in the summer of 2017 — before Wiseman played at East High School as a junior for Hardaway. The university said in a statement that Wiseman didn’t know about the money given to his family.

Hardaway was hired by his alma mater as head coach in March 2018. Wiseman committed to Memphis and Hardaway in November 2018 as the gem in the nation’s No. 1 recruiting class for Hardaway.

The lawsuit says the NCAA declared Wiseman eligible in May after months of investigation.

Wiseman’s attorneys say the NCAA said Wiseman is ineligible because Hardaway is considered a booster after he made a $1 million donation to the university’s Sports Hall of Fame in 2008. So under NCAA guidelines for boosters, Hardaway’s 2017 gift to the player’s family was impermissible.

Attorney Michael L. Buckner believes the NCAA has a case, noting the governing body will get its first chance at Monday’s hearing to argue. The initial paperwork was filed late on a Friday afternoon with the temporary restraining order signed about an hour before Memphis tipped off against Illinois-Chicago.

Buckner said attorneys for the NCAA also could appeal or argue to move the case to federal court. The NCAA also could detail what led the organization to reverse its original decision on Wiseman’s eligibility.

“The NCAA is going to be divulging everything in order win this case,” Buckner said. “And are you sure you want all that stuff out there? Are you sure you want how coach helped out financially and probably other ways. That’s something people don’t understand. Once you get into a legal process, it’s not just going be one-sided. Your side is going to be exposed as well.”

The risks include Wiseman’s chance to play college basketball and chase a national title while improving his future earnings. As a virtual lock to be a top pick — if not the first pick — in next year’s NBA draft, Wiseman could leave after his freshman year. Memphis faces potential NCAA sanctions that could impact the program long after Wiseman leaves, including postseason bans, which would affect future recruiting.

Jackson said the NCAA’s restitution rule was designed to punish schools and student-athletes to keep issues out of courts, often with discipline coming after a player has left campus.

Memphis and its fans know that only too well.

The NCAA vacated the Tigers’ record 2007-08 season after ruling Derrick Rose academically ineligible in a decision that came down after he concluded his lone season and was in the NBA. Memphis was ordered to take its national runner-up banner down from the rafters at the FedExForum and hide it away. Memphis also had its 1985 Final Four appearance vacated.

This time, Memphis is ready for the fight led by the university president.

“Given the unique circumstances in this case, we are hopeful for a fair and equitable resolution on James’ eligibility,” Rudd said on Nov. 8. “We support James’ right to challenge the NCAA ruling on this matter.”

A settlement — something that allows the NCAA to punish Memphis and allows Wiseman to play — could be the best option for both parties.

“When it gets to a point where a precedent may be set, the NCAA will settle a case to avoid a precedent that will impact hundreds of thousands of other athletes,” Jackson said. “They’ll settle the case. … And this ruling has too much significance to the NCAA’s overall enforcement scheme for them ever to risk having this rule invalidated.”