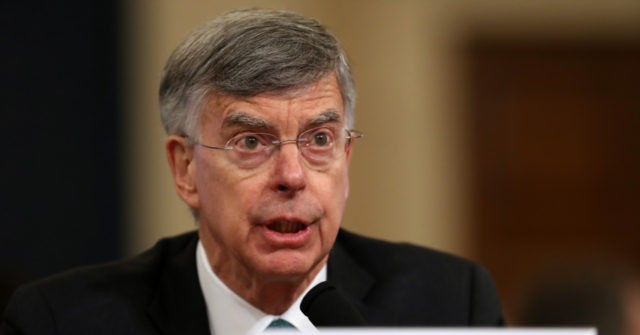 House Democrats called in as their first witness in their public impeachment inquiry hearing a U.S. diplomat who allegedly overheard President Trump on the phone asking about “the investigations” — what some Trump critics are calling a “bombshell” revelation.

The top U.S. diplomat in Ukraine, Amb. Bill Taylor, testified Wednesday in the first public hearings of the impeachment inquiry that one of his staff told him last week that he overheard Trump ask U.S. Ambassador to the European Union Gordon Sondland about “the investigations” during a July 26, 2019, phone call.

Taylor said, at the time, he was in Ukraine with Trump’s Special Envoy to Ukraine Kurt Volker while one of his staffers, reportedly U.S. diplomat David Holmes, was with Sondland at a restaurant when he called Trump and told him about a meeting with one of the Ukrainian president’s aides.

“The member of my staff could hear President Trump on the phone asking Ambassador Sondland about ‘the investigations,’” Taylor said Wednesday — an update to the previous testimony he gave behind closed doors last month to the House Intelligence Committee.

He said Sondland told Trump the Ukrainians were ready to move forward, and after the call, Holmes asked Sondland about Trump’s thoughts about Ukraine.

“Sondland responded that President Trump cares more about the investigations of Biden, which Giuliani was pressing for,” Taylor said.

House Intelligence Committee Chairman Adam Schiff (D-CA) followed up: “What your staff overheard was President Trump asking Ambassador Sondland about ‘the investigations.’ Is that right?”

“That is correct,” Taylor responded.

Taylor said the conversation happened the day after Trump spoke with Ukrainian President Volodymyr Zelensky on the phone on July 25, 2019.

Although Trump critics treated it as a “bombshell,” the White House in September released the transcript of the July 25, 2019, phone call between Trump and Zelensky itself, wherein the president himself directly asks Zelensky about investigations of alleged Ukrainian interference in the 2016 elections and of the Bidens, and Zelensky promises further action.

Therefore, what the staffer allegedly overheard on July 26, 2019, would not be anything different than what was said on the phone call.

According to Taylor, the staffer said Sondland said that the president “cares more about the investigations” of Biden. If Sondland did say that, it would be Sondland’s opinion and also not surprising, since Sondland has already testified that Trump did not care much for Ukraine, given that he believed that Ukraine had worked against him in the 2016 election.

Taylor’s comments, however, raise questions about Sondland’s testimony. Sondland testified that he never heard the president ask for investigations, only that Giuliani asked for them, presumably on behalf of the president. However, Sondland’s memory throughout the testimony appeared shaky.

Democrats have called Holmes to testify to the House Intelligence Committee, which is running the impeachment inquiry, on Friday during a closed-door session. He is currently the counselor for political affairs at the U.S. Embassy in Ukraine.

According to NBC News, Holmes served on the National Security Council as Afghanistan director from 2011 to 2012, during the Obama administration.