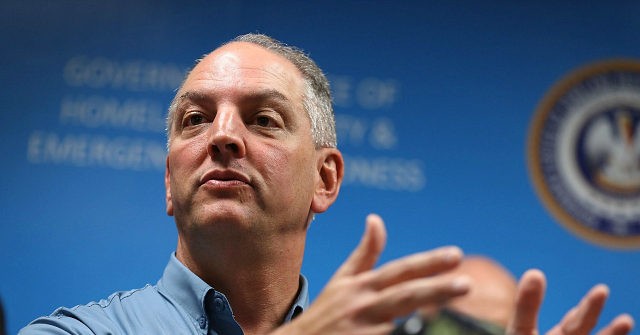 The editorial board of the Wall Street Journal said on Sunday that Democrat Gov. John Bel Edwards has hurt the economy in Louisiana by turning it into the trial lawyers state.

Economic growth is down, while fees paid to trial lawyers are up, the board wrote:

Louisiana used to be a leader in U.S. energy production, but Governor John Bel Edwards has turned it into a leading lawsuit producer instead. Jobs have declined while taxes and auto insurance rates have risen.

Mr. Edwards ran in 2015 as an anti-abortion Catholic and former Army ranger, rolling over Republican David Vitter who had been caught patronizing prostitutes. Falling oil prices in 2015 had hurt tax revenues and energy employment, and Democrats blamed the state’s economic problems on GOP tax cuts.

Edwards, a former trial lawyer himself, has been courting trial lawyers since the first days of his administration, as Governing.com reported in 2016:

Sometimes a politician can do favors for a friend and stick it to an enemy at the same time. That’s what Gov. John Bel Edwards is trying to do in Louisiana.

Edwards, a Democrat, wants the state to join some of its parishes in suing the oil and gas industry to pay for the restoration of environmentally damaged coastal land. To oversee the case, Edwards decided to hire Taylor Townsend, a former state legislator who just happens to chair the governor’s super PAC. Townsend put together a team of outside attorneys who, collectively, had given Edwards’ campaign $130,000 last year.

Needless to say, this led oil and gas officials to accuse Edwards of cronyism and doling out “massive legal fees for his friends and funders.” But the hiring also needled Jeff Landry, the Republican attorney general who many expect is preparing to challenge Edwards in the next election. Edwards and Landry have been feuding for a while now — well before the coastal land litigation came up. The attorney general has refused to approve more than 40 state contracts negotiated by the governor in part because of objections to language in the contracts barring LGBT discrimination. Edwards has challenged Landry’s authority to block his deals, but so far the rulings have gone Landry’s way.

The Journal began documenting Edwards’ favorable treatment of trial lawyers more than a year ago in an article written by Allysia Finley.

“Shortly after taking office in January 2016, [Edwards] met with oil and gas companies and issued an ultimatum: Fork over billions of dollars to help restore Louisiana’s eroding coastline or brave a drawn-out legal battle,” Finley wrote.

Edwards’ efforts, Truth in Politics, “a 501(c)(4) organization whose [stated] purpose is to bring truth to Louisiana politics and to build a grassroots movement urging Gov. John Bel Edwards to change course on his policies that hurt Louisiana,” asserted, have had a negative effect on the state’s economy:

The drawn-out legal battle referenced serves only to line the pockets of Edwards’ trial lawyer buddies, while agitating the oil and gas companies. For a man running a state that is struggling to secure more jobs and shed a bad business climate moniker, ticking off a major economic engine is the last thing Edwards should be trying to do.

The oil and gas industry employed about 5% of the state’s workforce, contributed about 10% of its aggregate payroll and accounted for between 10% and 15% of tax revenues, according to a 2016 report by Louisiana State University’s Center for Energy Studies.

Instead, Edwards convinced six coastal parishes to join his lawsuit crusade on the oil and gas industry, which is being led by the law firm Talbot, Carmouche & Marcello. That firm also just so happened to have raised $2 million for a super PAC to help Edwards win his 2015 election.

Edwards faces self-made Republican businessman Eddie Rispone, no fan of trial lawyers, in a runoff election on Saturday. The most recent polls show the race is a statistical tie.

It’s not just the Wall Street Journal criticizing the record of Edwards, a former trial lawyer himself, for making it easy for trial lawyers to disrupt the local economy.

President Trump shares that view as well, as The Advocate reported last week:

During his visit to Monroe to stump for Rispone last week, President Donald Trump said Edwards “is totally owned by the liberal trial lawyers.”

Rispone took the attacks on the profession a step further when he said Edwards “hurt the reputation” of his alma mater, the U.S. Military Academy at West Point, by going on to become a trial lawyer.

Trial lawyers have been big contributors to Gumbo PAC, the pro-Edwards independent expenditure group, which began attack ads against Rispone more than a month before the October 12 jungle primary that set up this Saturday’s two-way race between Edwards and Rispone for a four-year term as governor:

Usually candidates wait until Labor Day to hit full campaign mode, but Gumbo PAC, a group of trial lawyers is running the new ad backing Mr. Edwards, the Democratic incumbent, and attacking Eddie Rispone, a Republican businessman from Baton Rouge who is making his political debut and has self-financed his campaign with a $10 million personal loan.

The ad bring up various lawsuits filed over the years against Mr. Rispone, whose own ad buys in recent weeks depict him as a creator of thousands of jobs in the private sector and a stout supporter of President Trump.

The Rispone campaign called the ad “sloppy and ineffective,” pointing out that a previous version of the ad was pulled from the air. Rispone spokesman Anthony Ramirez said television stations deemed it demonstrably false for misrepresenting source materials and presenting allegations as facts.

With the outcome of Saturday’s election between Edwards and Rispone very much in doubt, President Trump is likely to bring up Edwards’ connection to trial lawyers when he holds another rally for Rispone in Bossier City, Louisiana, on Thursday.