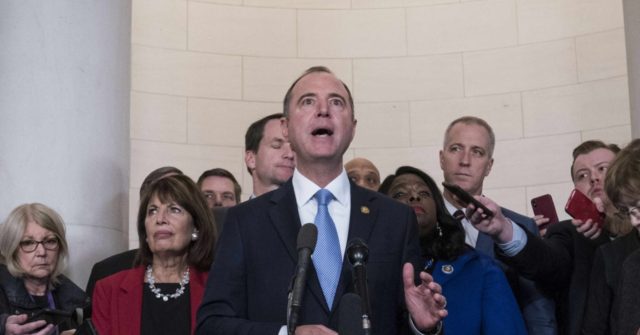 Democrats on the House Intelligence Committee released the long-awaited transcript from senior National Security Council official Tim Morrison on Saturday, and immediately distorted it for the benefit of the anti-Trump media.

It was a typical example of how Rep. Adam Schiff (D-CA) and his staff have tried to skew the fact-finding process in an effort to inflate public support for impeachment, believing few will read the lengthy transcripts for themselves.

First, the committee withheld the transcript since October 31, only releasing it after the first public hearings began last week. Morrison’s testimony was rumored to be very good for President Donald Trump’s defense — Rep. Mark Meadows (R-NC) had described Democrats in the room during the closed-door hearing as “sucking lemons” — and Republicans would have made good use of it, had they had the transcript available. But it was not provided.

In the interim, Democrats had sole possession of the document. Schiff does not allow copies of the transcripts to be released to Republicans, either in paper or electronic form. If they want to read transcripts, they must do so one by one, in the presence of a Democrat committee staffer. Not only is that rule humiliating, but it also allows Democrats to control the flow of information and to prepare their public arguments with no fear of timely Republican rebuttal.

In the Morrison case, Democrats released “key excerpts” that highlighted the few facts in his testimony that, they believe, help push the case for impeachment. Chief among these is that Morrison confirmed that he heard U.S. Ambassador to the E.U. Gordon Sondland claim that he told a Ukrainian official, in a private “sidebar” meeting, that aid would be released if the Ukrainian prosecutor general would publicly announce an investigation into Burisma.

But that is just hearsay evidence, as is Morisson’s confirmation of Charge d’affairs William Taylor’s testimony (repeated in public last week) that Sondland, after speaking to President Trump, “there was no quid pro quo, but President Zelensky must announce the opening of the investigations and he should want to do it.”

Sure enough, CNN and other networks highlighted these and other supposedly damaging sections of Morrison’s testimony.

These are the top news results on Google for the search “Tim Morrison,” as of Sunday morning, November 17:

But these reports downplay or omit the most important parts of Morrison’s testimony for Trump’s defense:

THE CHAIRMAN: Okay. I just wanted to follow up a bit on this.

One of the concerns, and there may be an overlap between the first two concerns you mentioned about the caII, and if the call became public. First, you said you wene concerned how it would play out in Washington’s polarized environment and, second, how a leak would affect bipartisan suppont for our Ukrainian partners.

Were those concerns nelated to the fact that the President asked his Ukrainian countenpant to look into on investigate the Bidens?

MR. MORRISON: No, not specifically.

THE CHAIRMAN: So you didn’t think that the President of the United States asking his counterpart to conduct an investigation into a potential opponent in the 2020 election might influence bipartisan support in Congress?

THE CHAIRMAN: That never occurred to you?

THE CHAIRMAN: Did you recognize during the — as you listened to the call that if Ukraine were to conduct these investigations, that it would inure to the President’s political interests?

All of these facts are missing in the Democrats’ “key excerpts.” The Democrats do acknowledge a few exculpatory moments, but downplay them.

For example, the “key excerpts” document includes Morrison’s testimony that the transcript of the July 25 call was placed on a more secure server by “mistake” — but focuses on the fact that it was not removed from the more secure server after that.

Morrison also confirmed that the Ukrainians did not know that the aid was being held up until a Politico article appeared on August 28, and he said that Sondland’s side conversation with a Ukrainian official in September was “the first time something like this [investigations] had been injected as a condition on the release of the assistance.” Democrats include that latter quote, but downplay it.

Similarly, Democrats distorted the testimony of Jennifer Williams, an aide to Vice President Mike Pence, whose testimony was also released on Saturday. Democrats highlighted the fact that Williams testified that she was told by another aide that Trump told Pence to skip Zelensky’s inauguration in May — though she did not hear that first-hand.

They quote her as saying the July 25 call “for me shed some light on possible other motivations behind a secunity assistance hold.” But they leave out her saying she “didn’t have any firsthand knowledge as to the reasoning.”

Both Morrison and Williams are scheduled to testify in public hearings before the committee on Tuesday.