Lawyer Michael Avenatti said he found “nothing funny” about “Saturday Night Live“’s cold open this weekend that put a soap opera twist on the latest developments in the House impeachment hearings – and poked a bit of fun at people forgetting him.

In what seemed a caricature of President Trump’s Twitter style, Avenatti said there was “Nothing funny about tired Saturday Night Live on Fake News NBC!”

“Question is, how does that total loser Pete Davidson save his dieing [sic] mediocre career by playing me and get away with these total Democratic hit jobs without retribution? This is the real quid pro quo. Investigate!!!”

The cold open, titled “Days of Our Impeachment,” featured a mess of characters, including Ambassador Bill Taylor falling in love with “telenovela sensation” Rep. Alexandria Ocasio-Cortez, Ambassador Gordon Sondland with amnesia and cast member Pete Davidson playing Avenatti, the ex-Stormy Daniels lawyer trying to shock the room with details about his former client’s alleged encounter with the president. 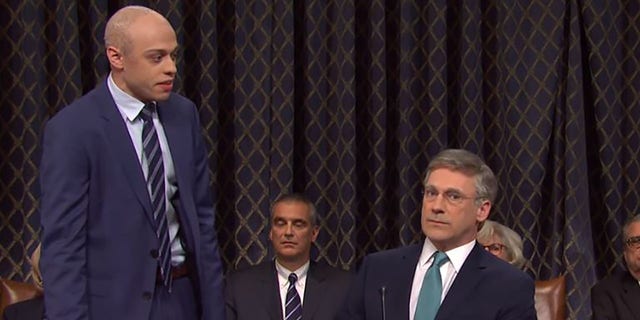 “I’ve got a bombshell that will change everything!” Davidson’s Avenatti proclaimed. “The president had an affair!”

“That storyline was from like last season,” John Hamm as Taylor answered.

“Fine, I’ll go, but you haven’t seen the last of …Who am I playing again?” Davidson laughed in the second reference to a recent airing of “Jeopardy!,” in which none of the contestants were able to correctly answer “Who is Avenatti?”