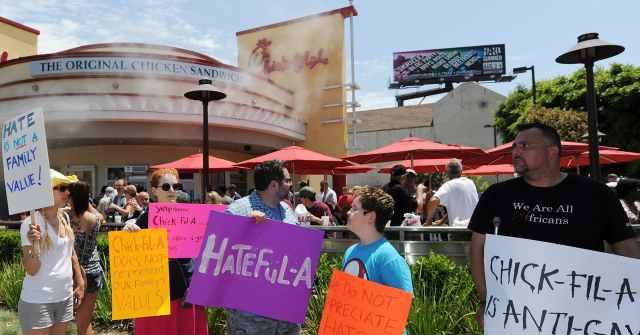 Chick-fil-A will reportedly stop donating money to charities including the Salvation Army and Fellowship of Christian Athletes following pressure from LGBT groups.

The company announced Monday that it is refocusing its charitable foundation to a smaller number of charities, focusing exclusively on education, homelessness, and hunger.

“Our goal is to donate to the most effective organizations in the areas of education, homelessness and hunger. No organization will be excluded from future consideration – faith based or non-faith based,” Tim Tassopoulos, president and COO of Chick-fil-A, said in a statement.

Chick-fil-A’s tax records shows that it gave to several Christian schools and charitable groups in 2018. None of those groups appears in a list of Chick-fil-A’s 2019 charitable giving that the company made available for preview.

Tassopoulos told the news site Bisnews on Monday that Chick-fil-A wants to be “clear about who we are” as it enters new markets.

As a result, the company will no longer give money to organizations including the Salvation Army, the Fellowship of Christian Athletes, and the Paul Anderson Youth Home.

Those charities have caused LGBT activists to target Chick-fil-A due to those organizations’ stances on homosexuality.

In 2018, Chick-fil-A gave $115,000 to the Salvation Army for the Angel Tree program, which provided gifts for 11,000 children during the holiday season. The fast-food chain also gave $1.65 million to the Fellowship of Christian Athletes to provide underserved youth with week-long summer sports camps at historically black colleges and universities (HCBU).

Chick-fil-A has faced mounting criticism from LGBT groups as it seeks to expand its corporate footprint. The Atlanta-based company recently announced the closure of its first restaurant in Great Britain just a week after it opened due to protests from LGBT activists. Airports in Buffalo, N.Y. and San Antonio, Tex. have banned Chick-fil-A restaurants in the face of similar pressure.