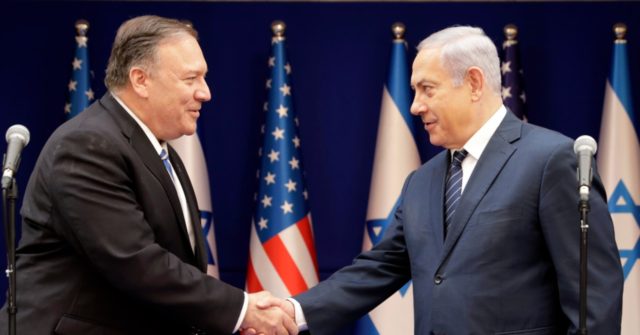 Secretary of State Mike Pompeo announced Monday that the U.S. had reversed the policy of Presidents Jimmy Carter and Barack Obama, who declared Israeli settlements in Judea and Samaria (the “West Bank”) illegal.

Israel took over the region during the Six Day War in June 967, after Jordan, ignoring pleas from Israel to stay out of the unfolding war with Egypt and Syria, began shelling western Jerusalem. Israel’s counter-attack was victorious.

Though the area is commonly described as “occupied,” Israel has long maintained that the territory is actually “disputed,” since Jordan had no sovereign right to the territory. If anything, Israel has a superior legal claim, resting on the Balfour Declaration on 1917 and the subsequent League of Nations approval of the British Mandate, which included provision for a Jewish National Home in Palestine. Palestinians also claim the area for their future state.

Jews had lived in portions of Judea and Samara for millennia. It is the Biblical cradle of the Jewish faith; Jews also lived in Jerusalem, Hebron, and other areas. Many were killed or expelled in the 1948 war of independence, but some began coming back, and establishing new settlements on state land, from 1968 onward. Critics alleged that Israel was violating the Fourth Geneva Convention, which deals with occupied territories, but Israel countered that the territory was not “occupied”; that Palestinians were not being expelled; and that Jews were entering voluntarily.

In 1978, the Carter administration adopted the position that the settlements violated international law. President Ronald Reagan reversed that policy, but then Obama reinstated it during the lame duck days of his administration.

After carefully studying all sides of the legal debate, this Administration agrees with President Reagan.  The establishment of Israeli civilian settlements in the West Bank is not per seinconsistent with international law.

First, we recognize, as Israeli courts have, that legal conclusions relating to individual settlements must depend on an assessment of specific facts and circumstances on the ground. Therefore, the U.S. Government is expressing no view on the legal status of any individual settlement. The Israeli legal system affords an opportunity to challenge settlement activity and assess humanitarian considerations. Israeli courts have confirmed the legality of certain settlement activities and has concluded that others cannot be legally sustained.

Second, we are not addressing or prejudging the ultimate status of the West Bank – that is for Israelis and Palestinians to negotiate.  International law does not compel a particular outcome, nor create any legal obstacle to a negotiated resolution.

Third, the conclusion that we will no longer recognize Israeli settlements as per se inconsistent with international law is based on the unique facts, history, and circumstances presented by the establishment of civilian settlements in the West Bank.  Our decision today does not prejudice or decide legal conclusions regarding situations in other parts of the world.

Finally, calling the establishment of civilian settlements inconsistent with international law has not advanced the cause of peace. The hard truth is that there will never be a judicial resolution to the conflict, and arguments about who is right and who is wrong as a matter of international law will not bring peace.  This is a complex political problem that can only be solved by negotiations between Israelis and Palestinians.

The United States remains deeply committed to helping facilitate peace, and I will do everything I can to help this cause.  The United States encourages Israelis and Palestinians to resolve the status of Israeli settlements in the West Bank in any final status negotiations. Further, we encourage both sides to find a solution that promotes and protects the security and welfare of Palestinians and Israelis alike.

Prime Minister Benjamin Netanyahu and other Israeli leaders celebrated the U.S. decision, though there were some critics on the Israeli left. Netanyahu called President Donald Trump to convey his personal gratitude for the change.

The Zionist Organization of America “strongly praised” the announcement that “the United States no longer adheres to the Anti-Semitic Orwellian lie that Jewish communities in Judea and Samaria are illegal and a breach of Article 49 of the Fourth Geneva Convention.”

The Republican Jewish Coalition called the change a “historic decision by the Trump Administration, one that recognizes the facts on the ground and the necessity of a negotiated peace between the parties to the conflict.”