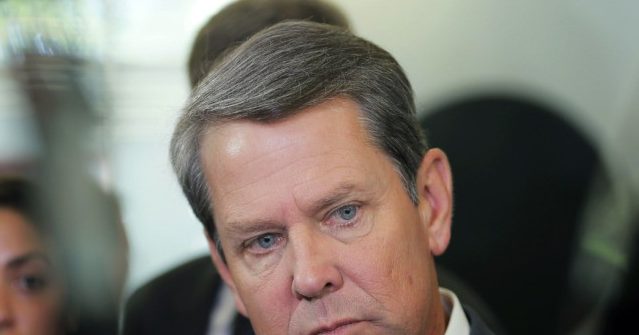 Georgia Republican Gov. Brian Kemp will reportedly announce on Wednesday that he will appoint business executive and establishment-backed candidate Kelly Loeffler to the U.S. Senate despite staunch conservative opposition to the pick.

The Atlanta Journal-Constitution reported Monday that Gov. Kemp will announce on Wednesday at 10:00 A.M. Eastern that he will appoint Loeffler as the interim senator for Georgia.

The Republican governor is reportedly putting the “final touches” on the rollout for Loeffler, who remains politically untested. Loeffler, if she is chosen as the interim senator, will fill out the two remaining years for the outgoing Sen. Johnny Isakson (R-GA), but could also run for reelection in 2022.

Kemp’s planned nomination of Loeffler might also spark a contentious battle between the Republican Party’s more conservative and populist base and its establishment groups.

The Atlanta Journal-Constitution reported that the National Republican Senatorial Committee (NRSC) will support Loeffler, which would give her an influential ally should she face a primary challenge from President Donald Trump’s preferred pick, House Judiciary Committee ranking member Doug Collins (R-GA).

Rep. Matt Gaetz (R-FL), a strong ally of President Donald Trump and supporter of his America First policies, said that Kemp is “hurting President Trump” by nominating a business executive who donated “$700k plus to Mitt Romney and nothing to Trump until she wanted in the Senate.”

.@realDonaldTrump told you how to be supportive: Appoint @RepDougCollins.

You are ignoring his request because you THINK you know better than @POTUS.

If you substitute your judgement for the President’s, maybe you need a primary in 2022. Let’s see if you can win one w/o Trump https://t.co/vtjT4CyLMI

Mark Levin, in response to the attacks on Gaetz from the Kemp camp, said that Gov. Kemp “is another [Mitt] Romney.”

“He’s about to appoint a RINO [Republican in Name Only] to the Senate. His surrogates are trashing conservative critics like Gaetz,” he added.

Looks like Georgia Governor Kemp is another Romney. He’s about to appoint a RINO to the Senate. His surrogates are trashing conservative critics like Gaetz. https://t.co/k7BNJAlPwO

As Gov. Kemp will reportedly tap Loeffler to the seat, Collins has told the Journal-Constitution that he is “strongly” considering a run for the Senate seat even if he is not picked.

On Fox News, Rep. Collins said Sunday he will have to make a decision whether to run for the Senate should Kemp not appoint him to the seat.

“That’ll be a decision we have to make,” he said.