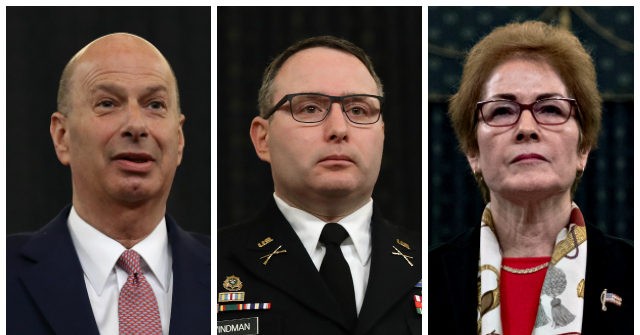 Over a thousand times, Chief Impeacher Adam Schiff’s “star witnesses” in hearings on Capitol Hill have admitted to having no first-hand knowledge of an alleged deal President Trump forged with Ukraine’s president to investigate Hunter Biden – the son of former Vice President Joe Biden – for corruption in that country.

Top U.S. diplomats also explained that under the Constitution the President does in fact possess authority to set U.S. foreign policy, fire ambassadors who fail to carry it out,  delegate responsibility to those he trusts, and dispense or withhold foreign aid according to recipients’ agreement to key U.S. objectives, contrary to Democrats’ assertions.

These are a few reasons why we have federal elections.

U.S. ambassadors to the European Union and Ukraine, the Deputy Assistant Secretary of State for European and Eurasian Affairs, and others with fancy titles – even the most clearly biased against the President – agreed that Ukraine is one of the most corrupt countries on Earth, criticized Hunter Biden’s business dealings there, and acknowledged that the Trump administration has provided crucial military aid to Ukraine that the Obama administration denied for fear of antagonizing Russia.

If most of their witnesses witnessed nothing, if the President’s foreign policy authority is agreed-upon, and if his voter-approved agenda has been more effective supporting Ukraine and deterring Russian aggression, you may ask yourself why House Democrats are pursuing another impeachment gambit.

After all, since Nancy Pelosi became Speaker, her party has already attempted – and failed – three times to impeach Donald Trump.

A two-year, $32-million dollar investigation into the “Russian Collusion Delusion” crumbled. Robert Mueller’s Special Counsel team found no evidence for Hillary Clinton’s excuse – that Donald Trump had conspired with Russia’s Vladimir Putin to steal it – for losing the 2016 election.

What could “The Resistance” possibly hope to gain with this latest foray into the nether regions of credibility?

The obvious answer is they have nothing left to lose.

Less than a year away from 2020 elections, Democrats are offering an unpopular socialist agenda and slew of far-left presidential candidates, including Joe Biden, virtually ensuring a second term for Donald Trump who is presiding over a remarkably strong economy due to tax cuts, deregulation, and Americans’ renewed sense of confidence.

Impeachment may be the only way to defeat him.

Surpassing Democrats’ desire for 100 percent tax rates, open borders, and Venezuelan health care, is defeating President Trump’s efforts to Drain the Swamp of partisan bureaucrats and their cronies, responsible for an unprecedented attack on our Constitution, which they had hoped their Russian collusion alibi would obscure.

A breach of public trust this big could mean trouble for the party well beyond 2020.

Although in the media they have been portraying themselves as defenders of democracy, it appears some former Obama administration officials — John Brennan, James Comey, and Andrew McCabe, to name a few at the CIA and FBI — formed a strike force to prevent Donald Trump’s election and then to remove him from office.

He was a secret Russian agent hypnotizing swing-state voters on Facebook, or so the story went.

That Adam Schiff, the House Intelligence Committee chairman who helped perpetrate this fraud on the public, moved immediately to impeach its target illustrates the depths to which he and the real colluders will dig to bury the truth. Voters rejected a third term for the Obama-Clinton regime, but its most devoted adherents rejected the voters’ decision.

That the timing of this impeachment effort coincides not only with campaign season, but also with a forthcoming Inspector General’s report is convenient for its principal subjects.

A report from the Department of Justice IG due out in December as impeachers scramble for the finish line of their bogus inquiry could expose widespread abuse of domestic surveillance under the Obama administration. A parallel DOJ investigation into its political origins among top intelligence officials spans multiple agencies, as well as foreign governments.

It seems harassment of conservatives at Barack Obama’s IRS and spying on journalists and Congress were only trial runs for what could be the biggest political scandal in American history.

Just as frenzied attempts to conceal Spygate brought it to light, so is Democrats’ latest charade unearthing potential foreign aid graft. Joe Biden, Barack Obama’s “point man” for Ukraine aid, not to mention the missing trillion-dollar stimulus, was apparently the guy to call when taxpayer money needed to disappear.

According to his own words, the former VP thwarted attempts by Ukrainian prosecutors to recover stolen public funds an energy company, Burisma, paid Hunter Biden, while Hunter’s firm lobbied the U.S. State Department on Burisma’s behalf.

One impeachment witness, former U.S. Ambassador to Ukraine Marie Yovanovich, received instructions from the Obama White House to avoid questions about the ordeal.

Coincidentally, she arrived in Ukraine just four months before the 2016 election, as disgruntled Ukrainian politicians began a coordinated attack on candidate Donald Trump, and the Russian Collusion story began to fester.

Another one is Alexander Vindman, director of European affairs on the U.S. National Security Council. Vindman was such an effective advocate for Ukraine, the land of his birth, its government offered him the job of defense minister. In the Trump administration, the lieutenant colonel, who disagrees with Donald Trump’s approach to Ukraine, champions impeachment.

Reports indicate Vindman worked with an anonymous whistleblower to spark Democrats’ latest attempt to oust the president from office. The whistleblower’s lawyer calls it a “coup,” reminiscent of the “insurance policy” some FBI lawyers cooked up to “destroy the Republic,” according to text messages the DOJ IG discovered in its Russia hoax investigation.

The American public is similarly souring on the spectacle of elite bureaucrats countermanding our commander-in-chief in hearings. Only in Washington would the president’s work to protect taxpayer money, our elections, and national security be considered an impeachable offense.

But because he has uncovered yet another scandal in the “scandal-free” Obama administration, one that threatens to claim a leading Democrat presidential candidate, impeachment we have, whether we like it nor not.

What could be Democrats’ last chance to undo an election, protect Joe Biden, and ensure that their far-left agenda prevails in 2020 could also be their worst idea yet.