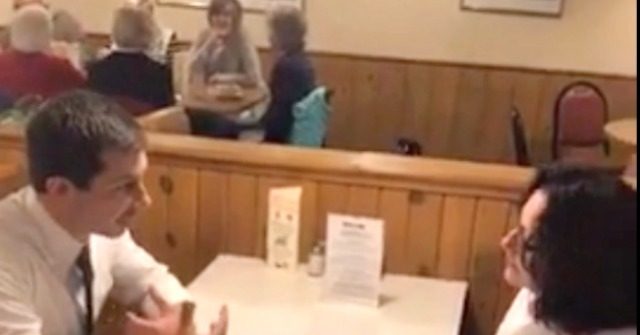 Mayor Pete Buttigieg on Sunday told a Hispanic worker in South Carolina that illegal immigrants would have access to government-funded health care if he was elected president.

Buttigieg was filmed by a supporter speaking Spanish to the    fvcd worker, explaining who would be covered under his proposed plan.

The Republican National Committee Research Team published a clip of the exchange with the translation of the South Bend Mayor’s remark.

I’ve said it before, and I’ll say it again.

Just because Pete Buttigieg is from Indiana doesn’t make him a moderate.

Here he is promising to include illegal immigrants in his plan for a government takeover of health care.pic.twitter.com/8sTB865fdX

“I’ve said it before, and I’ll say it again. Just because Pete Buttigieg is from Indiana doesn’t make him a moderate,” Republican National Chairwoman Ronna McDaniel said on Twitter.

Others on Twitter challenged Buttigieg to make his position clear in English.

The Buttigieg campaign did not respond to a Breitbart News request for comment.

Buttigieg participated in a roundtable with fast-food workers on Sunday sponsored by The Fight for $15 Action Fund and South Carolina McDonald’s workers.

The Mayor is working to earn support from voters in South Carolina, where he is trying to boost his low poll numbers in the state.