Her lawyer claims other Walmart stores have had the same problem: hidden blades hurting other people.

A Texas woman never thought her buggy for something like a razor blade, until a razor blade cut her several times at a Walmart in Austin, Texas.

“I had several cuts to my hands and at that point. I had lost so much blood I lost consciousness,” said Silver Taylor. “[I had] large lacerations on my hands. I also hit my head pretty hard and I fell hard on my back.”

Taylor did not even realize what had happened until someone else pointed out the blood all over her hands. The incident put her in the hospital.

“I can’t do normal things, so I feel helpless. I didn’t get to make Thanksgiving dinner. That’s not fair. It’s not fair,” said Taylor.

You can not blame Taylor for feeling helpless. She is a mom who runs a lot of errands alone.

“No, I’m not okay,” Taylor said. “I’m not okay at all. I feel like a failure to my children because I’m such a rock in my household. My tools are broken. My tools are injured. I’m a mom. I’m a wife and I can’t do the smallest things, like open up a refrigerator door.”

Taylor filed a claim against Walmart uner premise liability and negligence. But she says she wants something more from Walmart.

“I’d like an ‘I’m sorry.’ I’d like Walmart to not treat me like a blanket statement of all their other injuries that have happened in their stores. I’m a human being,” Taylor said.

This is not the first incident that occurred at a Walmart. In 2015, a woman was shopping at her local Walmart, when her son noticed something underneath the handles while using a wipe to clean the edges.

Lisa Zimmerman said her son told her something metal was poking out of the handle, and then she discovered a long surgical razor blade, embedded in the cart’s handle. Zimmerman was terrified, saying that she likely would have sliced her hand if she had not wiped down the handle with a sanitizing wipe before. Zimmerman’s local Walmart also responded to the incident, saying store workers immediately checked other shopping carts, but found no other razor blades. The store checked surveillance footage for potential suspects, but could not find any information. 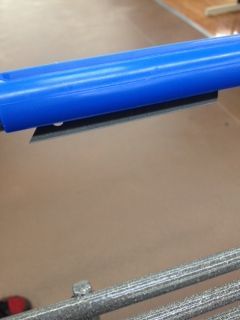 Another incident occurred at a Walmart to a customer named Cheryl Johnson who spoke with Cleveland 19 News, stating she and her husband, Mel, were shopping at night, when her husband went to move an abandoned shopping cart out of the aisle. That is when Johnson was cut by a razor sticking out of the shopping cart’s handle.

The blade, as shown in the picture taken by Cheryl, was upside down. Luckily, her husband was only pricked by it’s edge. The Johnsons reported it to Walmart staff and management and filed an incident report with the store. Johnson says she’s afraid this is something that might be going on nationally, and is trying to alert customers as much as she can.

Why would someone put razor blades underneath the handles of shopping carts? Simple. Walmart Inc. believes that a shoplifter might cut a security tag and stash the blade in the shopping cart handle to make it easier to avoid security cameras. Or maybe it is just to hurt someone? The answer can never be known for sure.

In the Johnson case, Walmart stated that its staff conduct regular checks daily to search for other razor blades in handles of shopping carts.

Fortunately, both individuals involved were not severely injured, but it could have been much worse. To avoid situations like these, do regular checks before you start pushing the cart by looking underneath the handlebar, and on the sides. If you have children, make sure and check before you put them in their seat. Not doing so could lead to potentially dangerous cuts, or lead to infections and diseases that can be a serious threat. It’s a dangerous and crazy world we live in and we better check twice before shopping from now on.