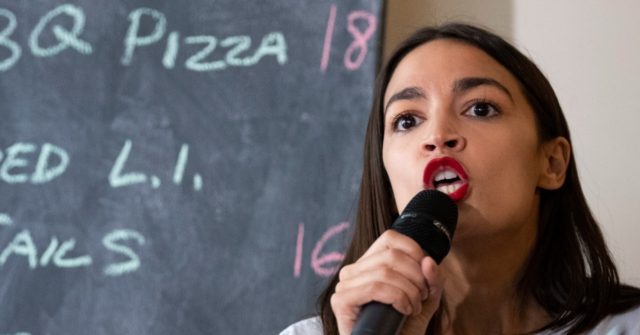 Ocasio-Cortez on Thursday reacted to the formalization of the Trump administration’s food stamp work requirements, which will take effect April 1 of next year.

“We’re taking action to reform our SNAP program in order to restore the dignity of work to a sizable segment of our population and be respectful of the taxpayers who fund the program,” Agriculture Secretary Sonny Perdue said, according to NBC News.

Americans are generous people who believe it is their responsibility to help their fellow citizens when they encounter a difficult stretch. That’s the commitment behind SNAP, but, like other welfare programs, it was never intended to be a way of life.

Ocasio-Cortez took issue with the requirements and claimed that her family “might’ve just starved,” had they been in effect years ago.

“My family relied on food stamps (EBT) when my dad died at 48. I was a student. If this happened then, we might’ve just starved,” she wrote on Twitter.

“Now, many people will,” she added, accusing the GOP of working “overtime to create freebies for the rich while dissolving lifelines of those who need it most”:

My family relied on food stamps (EBT) when my dad died at 48.

I was a student. If this happened then, we might’ve just starved.

Now, many people will.

It’s shameful how the GOP works overtime to create freebies for the rich while dissolving lifelines of those who need it most. https://t.co/WOrYvhfPj4

The Heritage Foundation, a conservative think tank, responded to the freshman lawmaker’s tweet, noting that the work requirements will only apply to able-bodied adults between the ages of 18 and 49 who do not have dependents:

The number of Americans on #foodstamps has plummeted as jobs and wages have increased—especially for low-income Americans.https://t.co/QlKNUlc7Xh

She rebuked the think tank’s point, vaguely asserting that the rule “ignores the reality of American life” and implied that those who disagree with her position have not “dealt with the actual lived experience”:

These exclusionary “rules” sound great to anyone who hasn’t dealt with the actual lived experience. In truth it means paperwork, waiting, & absurdist bureaucracy.

Let’s talk about the example of severe depression, which is an elevated risk for people in economic hardship.

Or let’s talk about food stamps and cars!

This is one of the wildest rules to me.

If you have a busted car that’s worth a less than $5k (say, to drive to that work req), it can preclude you from food stamps.

See how these “rules” start to stack up?https://t.co/yIc1YblMcR

The devil (that starves low-income Americans) is in the details. https://t.co/lqxUqKjjCY

The current rules require childless, able-bodied adults on the program to “work at least 20 hours a week for more than three months over a 36-month period to qualify for food stamps, but states have been able to create waivers for areas that face high unemployment,” according to NBC News.

The new rule will add restrictions to those waivers, only allowing them if the unemployment rate in the area is over six percent.

The USDA estimates that 688,000 will lose access to food stamps under the new rule, and it will save taxpayers $5.5 billion over the next five years.

The news coincides with Friday’s jobs report, which indicated that the U.S. economy added 266,000 jobs for the month. The unemployment rate fell to 3.5 percent, “matching the lowest level in 50 years,” as Breitbart News reported.