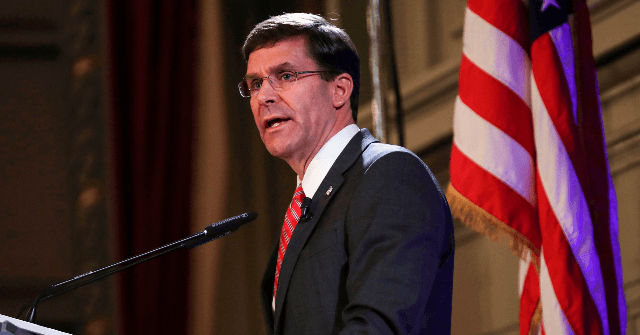 Defense Secretary Mark Esper said Saturday that the Trump administration has been “very aggressive” with Russia, contrary to critics’ assertion.

“I think we’ve been very aggressive with regard to Russia. I’ve called them out time after time in any number of fora just as I did today with regard to their bad behavior, you know their invasion of Georgia, their seizure of Crimea, their actions in Ukraine, we support our friends and allies,” he said at the Reagan Defense Forum.

When asked whether that was different from the previous administration, Esper responded, “I think we’ve upped our game.”

Esper cited the provision of lethal aid to Ukraine to fight against Russia, and getting NATO allies to increase their defense spending.

“By 2024, the increased annual spending by our NATO allies will be nearly $400 billion dollars. That’s all going into capabilities,” he said.

He said NATO has developed the “NATO Readiness Initiative,” which calls for 30 battalions, 30 squadrons, and 30 capital ships to be ready within 30 days.

“That’s a big change for NATO. We now have NATO focused on China, something that hasn’t happened in many years. So we had a very successful NATO meeting, but a NATO that’s also reinvigorated by what Russia’s doing,” he said.

The U.S. competes with Russia “all over,” including in Syria.

“I think we’re pushing back very strongly against Russian bad behavior,” he said.

He said the U.S. is considering another tranche of aid to Ukraine soon.

“We have another tranche coming up, I think it’s around $250 million,” he said.