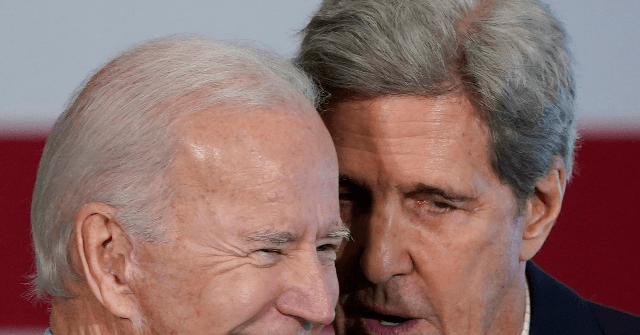 Former Secretary of State John Kerry claimed ignorance of Hunter Biden’s work with Burisma Holdings, a Ukrainian natural gas conglomerate, on Sunday—despite evidence to the contrary from Obama administration officials and even his own stepson.

Kerry, who recently endorsed Joe Biden’s White House bid, was asked about the topic while campaigning with the former vice president in New Hampshire. In particular, Kerry was questioned if he knew about the younger Biden’s decision to join Burisma’s board of directors in 2014 and if he was “comfortable with the arrangement” as secretary of state.

“I had no knowledge about any of that, none,” Kerry told reporters. “No.”

When pressed, Kerry doubled down on the claim, going as far as to say he still knew nothing about the company, event though its at the center of the impeachment inquiry into President Donald Trump.

Kerry’s claim of ignorance, however, is undercut by former employees of his own State Department, the Obama administration, and even his own stepson.

When Hunter Biden first joined Burisma’s board of directors in 2014, alarm bells were set off in both Washington, DC, and Europe. As Peter Schweizer detailed in his book Secret Empires: How the American Political Class Hides Corruption and Enriches Family and Friends, Hunter Biden secured the appointment, which paid as much as $83,000 per month, despite no background in the energy industry or Ukraine. His lack of experience, coupled with the fact that Joe Biden had just been made the Obama administration’s point man on Ukraine, immediately raised questions from ethics watchdogs about conflicts of interest.

Adding to concerns is the fact that, at the time Hunter Biden joined Burisma—where he was paid as much as $83,000-per-month—the company was seen as actively courting western leaders to prevent further scrutiny of its business practices. The same month Hunter Biden was tapped for the group’s board, the United Kingdom froze accounts belonging to Burisma’s founder, Mykola Zlochevsky, under suspicion of money laundering.

A Ukrainian official with strong ties to Zlochevsky admitted in October the only reason that Hunter Biden secured the appointment with Burisma was to “protect” the company from foreign scrutiny. The claim has credence given that at the time, Joe Biden, as the sitting vice president, was tasked with leading the Obama administration’s policy towards Ukraine in response to Russia’s invasion of Crimea.

One of the people worried about the appearance of conflict of interest with the entire situation was Christopher Heinz, Kerry’s stepson who at the time was a partner in an investment firm with Hunter Biden. According to emails obtained by the Washington Examiner, Heinz rushed to play damage control with State Department officials only hours after Hunter Biden’s appointment.

It is unclear what came of that correspondence, or if it was significant to formulating the official line taken by the Obama administration on Hunter Biden’s wheeling and dealing in Ukraine. As the Washington Free Beacon previously noted, both White House press secretary Jay Carney and State Department spokesperson Jen Psaki ducked questions when asked about the appointment the day it became public. In each case, reporters were told Hunter Biden was a “private citizen,” and any questions should be referred to then-Vice President Joe Biden’s office.

Psaki’s official statement on the topic, in particular, makes it difficult to believe Kerry was unaware of the situation. As the official spokesperson for the Kerry-era State Department, Psaki’s comments would likely have required approval by either Kerry or his most senior aides.

Further undermining Kerry’s claim to not know anything is the testimony of one of his top diplomats, offered to Congress as part of the impeachment inquiry. Testifying before the House Intelligence Committee in November, Deputy Assistant Secretary of State George Kent admitted he reached out to his superiors and the former vice president’s office about Hunter Biden’s work with Burisma in 2015.

“I raised my concern that Hunter Biden’s status as a board member could create the perception of a conflict of interest,” Kent said.