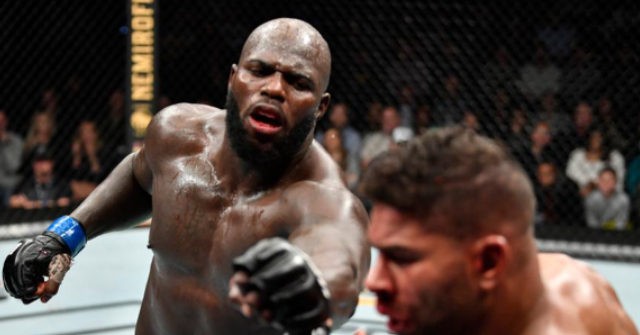 Alistair Overeem was winning his UFC heavyweight bout on Saturday night, right up until things took a sudden and gruesome turn.

Overeem was battling Jairzinho Rozenstruik and seemed to have control of the bout, when all of a sudden, Rozenstruik uncorked a vicious right hand that literally exploded Overeem’s face.

You can see his lip completely fly off from that Jairzinho Rozenstruik just woke everyone up.

I feel bad for anyone that bet Overeem winning. #UFCDC pic.twitter.com/e7rDmTiMBb

Amazingly, Overeem managed to get up after the ferocious blow, but the fight was called due to the injury and the fact that the Dutch fighter was still clearly woozy from the hit.

Getting stitched up. Lip not to sexy at the moment.. a little bit a fast stoppage if u ask me – but hope u guys enjoyed the fight 💪🏽💪🏽💪🏽💪🏽😌

The heavyweight bout did end up making history, not for being the only time in history that a fighter’s lip came off. But, Rozenstruik’s punch became the latest ever in a heavyweight fight, TMZ Sports reports.