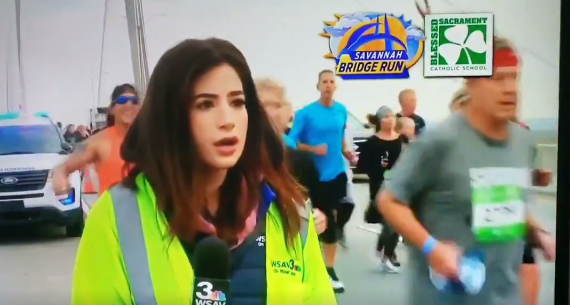 A brazen creep slapped a TV reporter’s behind as she reported live from a race in Georgia.

WSAV-TV’s Alex Bozarjian was on air, with joggers mugging the camera as they dashed past her at the Savannah Bridge Run 10K Saturday, when a man in a hat and sunglasses appeared to smack her as he ran past, video shows.

The journalist could be seen recoiling in shock and staring off at the man, before composing herself and continuing her broadcast.

“To the man who smacked my butt on live TV this morning: You violated, objectified, and embarrassed me,” Bozarjian tweeted later on Saturday, alongside footage of the on-air assault.

“No woman should EVER have to put up with this at work or anywhere!! Do better.”

The director of the Savannah Sports Council, Robert Wells, responded to her tweet and vowed to find the gross jerk.

“Alex, what happened today is 100% unacceptable. You have my assurance we will identify him,” Wells said.