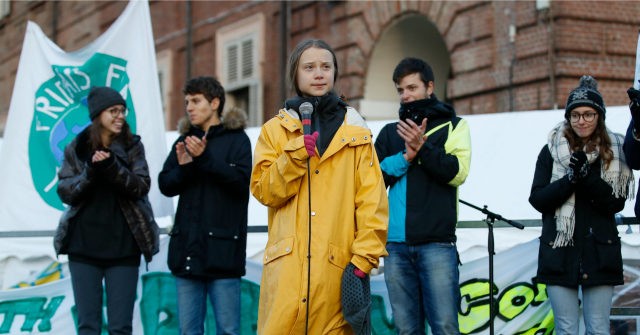 Time’s “Scold of the Year,” Greta Thunberg, told a crowd in Italy that “we will make sure we put world leaders against the wall” if they do not do what she tells them to do.

On her way home, the 16-year-old Swedish eco-activist and chronic truant stopped to address a Fridays for Future gathering in Turin, Italy, at which she went the full-Fidel Castro.

“Unfortunately, we probably already know the outcome. World leaders are still trying to run away from their responsibilities but we have to make sure they cannot do that. We will make sure that we put them against the wall and they will have to do their job to protect our futures,” she said, according to the Daily Mail.

“Against the wall” is fairly common jargon in revolutions, especially youthful revolutions, and the accepted translation means executions — lots and lots of executions, specifically firing squads, where the old leaders are permanently removed by fresh-faced revolutionaries.

During the speech, and while wearing what looks like a plastic — and, therefore, a petroleum-based — yellow rain slicker, Greta shouted her usual spiel about how The Children should be in charge of everything because The Children will have to live in a future that will not exist unless we return to the Dark Ages of wind and solar power, unless we accept socialism.

The adults are behaving as if there is no tomorrow but there is a tomorrow, it is the tomorrow where our young people will live and we have to fight for that tomorrow. We can no longer take that tomorrow for granted.

Greta added that the next decade “will define our future.”

She said: “What we decide to do or not to do in this decade we will have to live with for the rest of our lives.

“And our children and our grandchildren will also have to live with it.

“So 2019 is almost over and we must make sure that 2020 is the year of action, is the year when we bend the global emissions curve.

“We must make sure, and we will make sure that if we stand together we can do it.”

Granted, that’s more than ten times yours truly, but when you consider the media hype not just here in America, but throughout the world… Well, that’s not a whole lot.

What I’m saying is that, once again, the media are gaslighting us into believing Greta is some kind of worldwide phenom, when she’s about 1/10 the phenomenon of a lesser Kardashian sister.

The world elites adore Greta; people like the leftist editors at Time adore any child who will lead the world backwards to the Dark Ages, to socialism, to a centralized government where all the Deplorables become serfs. They have loved this stuff since the ’60s, when we were all told to “Listen to the children,” and all that got us was a national case of the clap and an addiction crisis.

But in the real world, the world where you and I live, a Western world filled with billions and billions of everyday people, the number of those people interested in what Guyana Greta has to say is less than that of an aging quarterback in a place called Green Bay, Wisconsin.

Perspective in these matters is important, and the only place Greta is a phenom is in the isolated, velvet-lined, elite bubbles of the media and far left.

Good people, however, flinch at the sound of her anti-science madness and threats, at her Bond-villain rants.