At the peak of his career, Paul Harvey, the news commentator and talk-radio pioneer whose staccato style made him one of the most familiar voices in the United States, reached over 24 million listeners.

Although he was very precise about everything he had to say, no one could imagine that he would become today’s truth with his story from 54 years ago.

I read this a few days ago and was blown away with how relevant it is today.

This speech was broadcast by the legendary ABC Radio commentator on April 3, 1965.

If I were the devil…

If I were the prince of darkness, I would want to engulf the whole world in darkness.I’d have a third of its real estate and four-fifths of its population, but I would not be happy until I had seized the ripest apple on the tree — thee.

So, I would set about, however necessary, to take over the United States.

I’d subvert the churches first, and I would begin with a campaign of whispers.

With the wisdom of a serpent, I would whisper to you as I whispered to Eve: “Do as you please.”

To the young, I would whisper that the Bible is a myth. I would convince the children that man created God instead of the other way around. I’d confide that what’s bad is good and what’s good is square.

And the old, I would teach to pray after me, “Our Father, which are in Washington …”

Then, I’d get organized, I’d educate authors in how to make lurid literature exciting so that anything else would appear dull and uninteresting.

I’d peddle narcotics to whom I could. I’d sell alcohol to ladies and gentlemen of distinction. I’d tranquilize the rest with pills.

And with promises of higher ratings, I’d have mesmerizing media fanning the flames.

If I were the devil, I would encourage schools to refine young intellect but neglect to discipline emotions. I’d tell teachers to let those students run wild. And before you knew it, you’d have drug-sniffing dogs and metal detectors at every schoolhouse door.

With a decade, I’d have prisons overflowing and judges promoting pornography. Soon, I would evict God from the courthouse and the schoolhouse and then from the houses of Congress.

In his own churches, I would substitute psychology for religion and deify science. I’d lure priests and pastors into misusing boys and girls and church money.

If I were the devil, I’d take from those who have and give to those who wanted until I had killed the incentive of the ambitious.

What’ll you bet I couldn’t get whole states to promote gambling as the way to get rich?

I’d convince the young that marriage is old-fashioned, that swinging is more fun and that what you see on television is the way to be.

And thus, I could undress you in public and lure you into bed with diseases for which there are no cures.

In other words, if I were the devil, I’d just keep right on doing what he’s doing.

I use to listen to Paul Harvey with my father. He was always very accurate on everything he said. All the things he mentioned 54 years ago are exactly what’s going on in the world today.

Think you can solve this puzzle?

Where is the tree with a star on top?

I came across this illusion and none of my friends could solve it.

The feeling you get when you finally solve a tricky brain teaser is very satisfying. And on top of that, it also helps improve your memory.

My friends and I had to sit down together and have a long, hard look at it to figure this one out.

Visual challenges are great fun. You really have to focus to find that one little detail that gives you the solution. Sometimes it can take you a while, but that only makes it feel that much more satisfying when you do finally figure it out.

At first glance, this optical illusion just consists of a lot of Christmas trees. But somewhere in the picture, there’s one tree with a star on top. 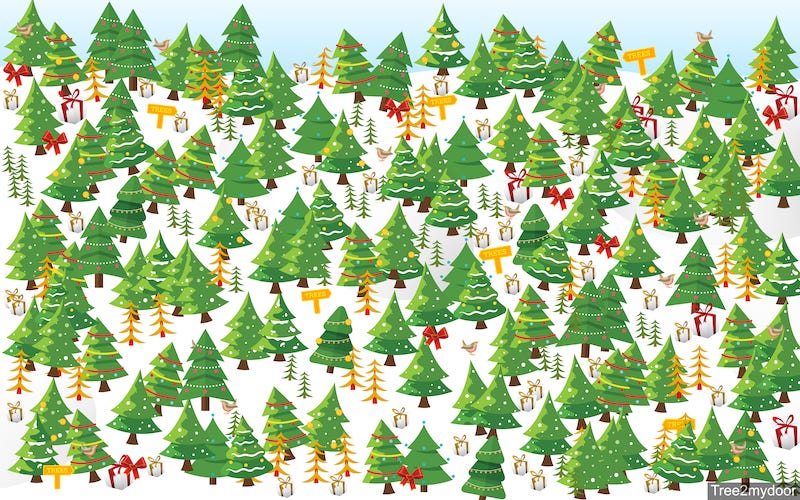 This one is really tricky. If you didn’t spot the star, don’t fret – the solution is shown below. 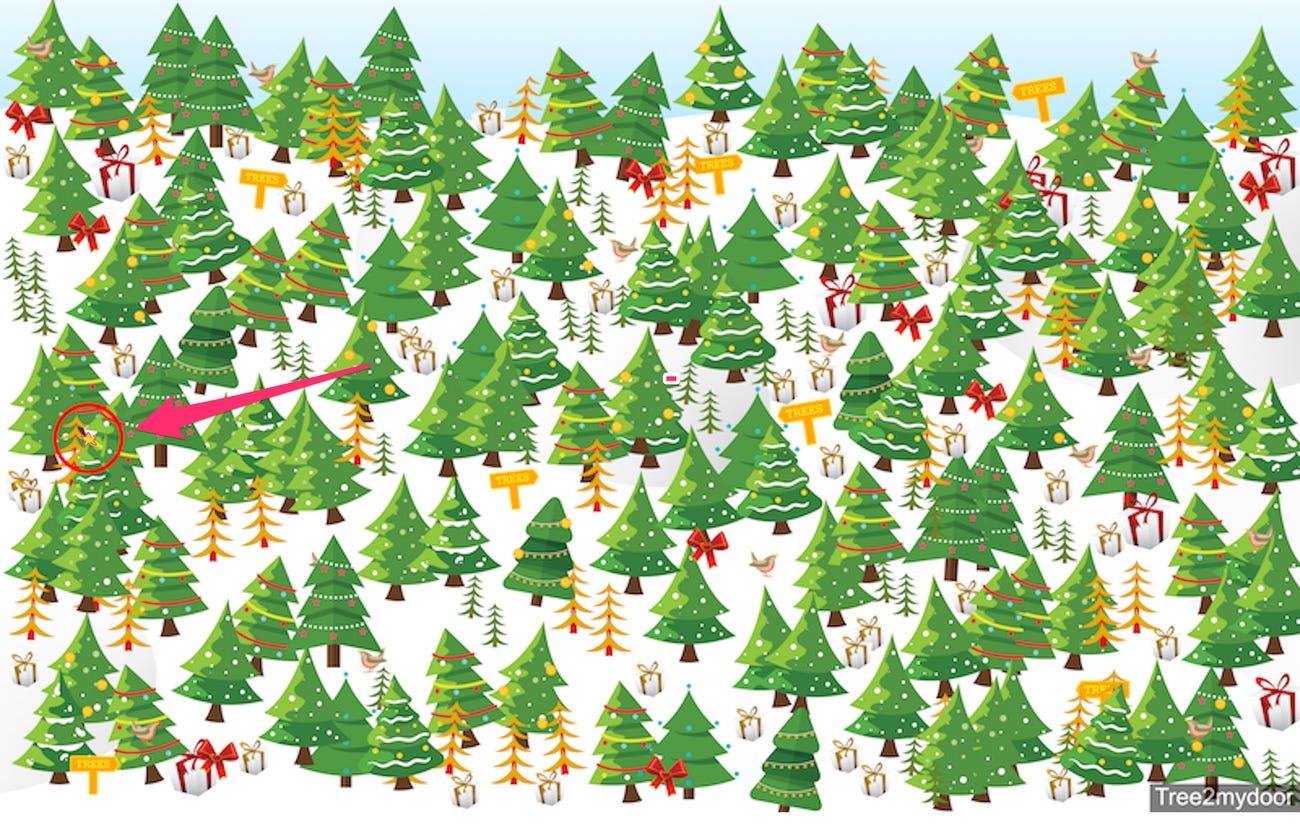 There it is, on the left. This is one of the trickier ones so far. 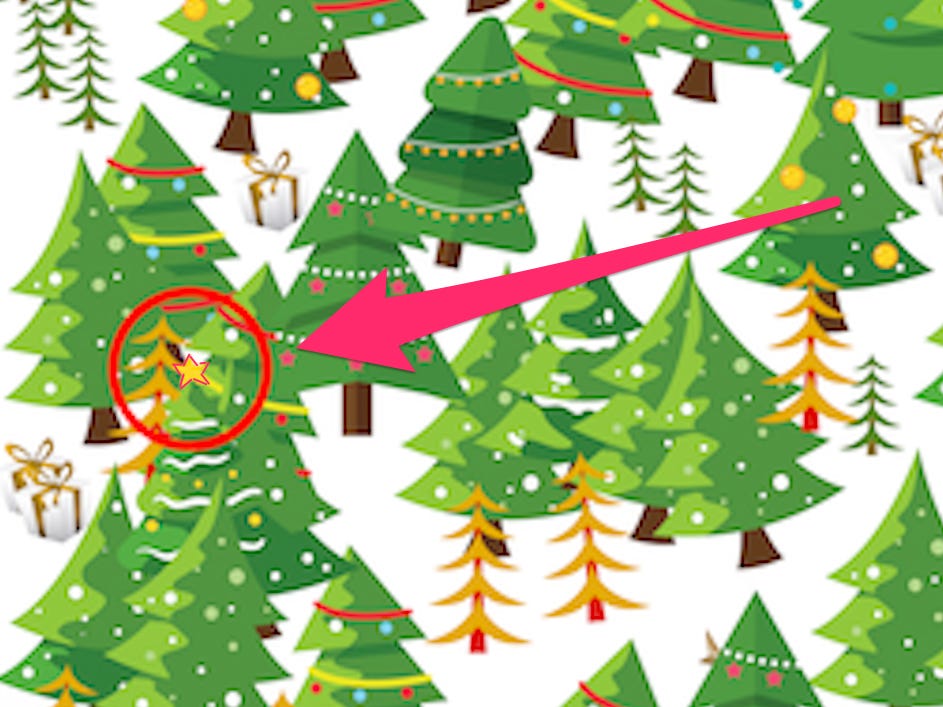 Press the share button if you passed the challenge!

Riddles and any type of brainteasers are great for sharpening the mind and exercise the brain. Everyone can use a little brain stimulation instead of just looking at a cell phone or computer screen all day.

Solving puzzles and figuring our problems are great ways to have fun and add a challenge to your life.

My mom and dad are always doing crosswords, solving sudoku or some other puzzle. Research shows that it keeps your mind fresh and alert and even can help ward off memory loss in your later years.

Stimulating the brain with these kinds of puzzles is really good and healthy for you.

Sitting down with something that makes you think and contemplate the different answers is a great way of re-energizing and activating your brain movement. It really wakes you up and turns the light on, so to speak.

I found this riddle earlier this week. Apparently, only 1 in 5 get it right on the first try. I think that sounds a bit odd, because it wasn’t that hard – but it really makes you think twice.

I guess that’s the way it is with a lot of these riddles and puzzles – either you get it right straight away, or you have to sit and ponder it for a good long while before finding the answer.

In any case, here’s the riddle:

Simon’s Dad has 4 sons; March, April and May – but what is the fourth son’s name? 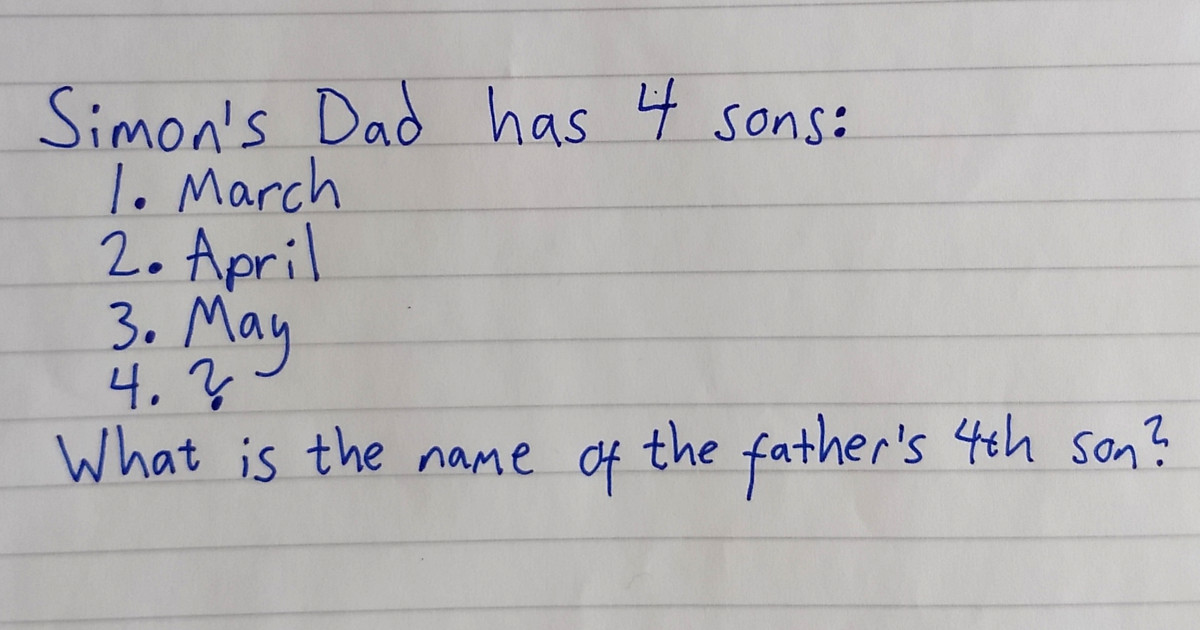 Okay, did you figure out the answer?

You can actually solve it by simply reading the question!

If you figured it out already, then congratulations – you’re something of a genius (well, you’re sharper than most at least). You’re one of the 20% who knew the answer to this tricky riddle right away.

If you didn’t manage to solve the riddle, then the answer is below:

The fourth son’s name is Simon. “Simon’s Dad has 4 sons…”, so that means Simon is one of the sons!