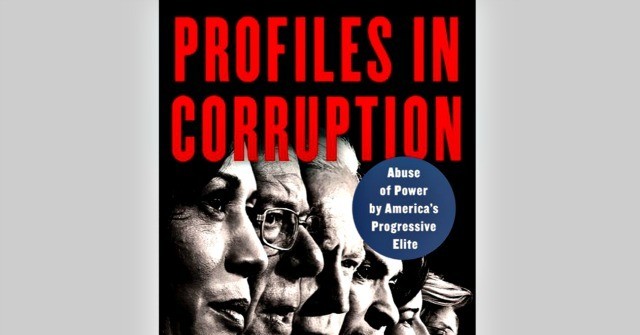 Top Democrats are signaling not-so-subtly that they are nervous as a  forthcoming book from Peter Schweizer that will expose widespread corruption in the Democrat Party drops in just ten days.

The cover of the soon-to-be-published book, Profiles in Corruption: Abuse of Power by America’s Progressive Elite, was revealed by Axios’s Mike Allen on Thursday:

Schweizer is a Breitbart News contributing editor and the president of the Government Accountability Institute (GAI). He has written multiple bestselling books exposing corruption in Washington.

While little is known publicly about the book thus far, Allen quotes Schweizer as saying he spent a year and a half investigating for it, and that it is “a sweeping, detailed look at how the leading figures of progressivism have leveraged the power of their positions.” Allen reported that the book features chapters on each of them, as well as Los Angeles Mayor Eric Garcetti and Sen. Sherrod Brown (D-OH).

It has also been revealed that the book will expose the “Biden Five,” a group of Biden’s family members beyond son Hunter Biden who have siphoned tens of millions of dollars from taxpayers and from guaranteed loans. As Breitbart News reported, the Burisma Ukrainian natural gas company scandal surrounding Hunter Biden that was at the center of the House Democrats’ partisan impeachment push in Congress is just “the tip of the iceberg” when it comes to Biden corruption, and much more will be exposed in this book.

Schweizer’s last two books were filled with explosive revelations about career politicians. Clinton Cash, his 2015 book, uncovered significant corruption swirling around the Clinton Foundation and Clinton Global Initiative and how the Clintons orchestrated a massive international pay-for-play political scheme. Secret Empires, his most recent book, uncovered much about Joe and Hunter Biden as well as other career politicians. Much of the revelations about Hunter Biden’s role with Burisma originated in Secret Empires.

So it’s no surprise that since these initial revelations about the explosive Profiles in Corruption book out on Jan. 21, the book has rocketed near the top of Amazon’s bestseller list, and interest in it has spiked considerably.

What’s new is that a spokesman for another top Democrat–former U.S. president Bill Clinton–is now formally denouncing the book. Angel Urena, the press secretary for former President Clinton, tweeted in response to Allen’s story announcing the book a claim that various investigations spawned in part by Clinton Cash have not been fruitful. In so doing, Urena urges the media and political class to not “aid” Schweizer in exposing the corruption of Biden, Harris, Warren, Sanders, Booker, Klobuchar, Garcetti, and other Democrats, but instead to just ignore it all:

After a two year investigation, Trump’s DOJ has exonerated the @ClintonFdn.

Reminder that said investigation was based at least partly on allegations in Clinton Cash. Schweizer is fixing to lie again, question is will we – again – aid him in doing so. https://t.co/zO35UYi4cC

Justice Dept. winds down Clinton-related inquiry once championed by Trump. It found nothing of consequence. https://t.co/iTchgpn046

Huber’s tasking was nebulous from the start. Some people involved in the matters he was said to be reviewing expressed surprise that they were not contacted by the U.S. attorney, and wondered privately what he was doing. Some in the Justice Department considered him more reviewer than investigator. He would get involved, people familiar with the matter said, only if other cases were not being handled properly.

Urena’s insinuation that because Huber’s lackluster-at-best review of the matter that really was not much of an investigation after all per the same Washington Post story he’s pushing to try to claim his bosses the Clintons are in the clear means that Clinton Cash did not somehow live up to its hype is just not true.

In fact, Clinton Foundation donations plummeted after Hillary Rodham Clinton–Bill’s wife and the 2016 Democrat presidential nominee–lost the election to President Donald Trump four years ago. What’s more, many independent investigations like stories in the New York Times by Jo Becker have upheld the key findings in the book surrounding the Clinton Foundation and the Uranium One scandal.

The Clinton Foundation’s $30.7 million revenue last year is less than half the $62.9 million it raised in 2016 as Clinton was at the height of her presidential campaign. Each of the two years since Clinton’s loss in the 2016 election has seen the organization’s revenue drop to record lows, raising less than any fiscal year in more than a decade — a sharp contrast to the $249 million raised during Clinton’s first year as secretary of state.

What Urena’s tweets casting doubt on Schweizer’s forthcoming book more accurately demonstrate, however, is that the official channels of the highest levels of the Democrat Party–Urena is former President Bill Clinton’s press secretary–are worried about this Profiles in Corruption book and what it may reveal about top Democrats. And they’re so worried they’re already, ten days before its public release, publicly rebutting the book before they even see what’s in it.