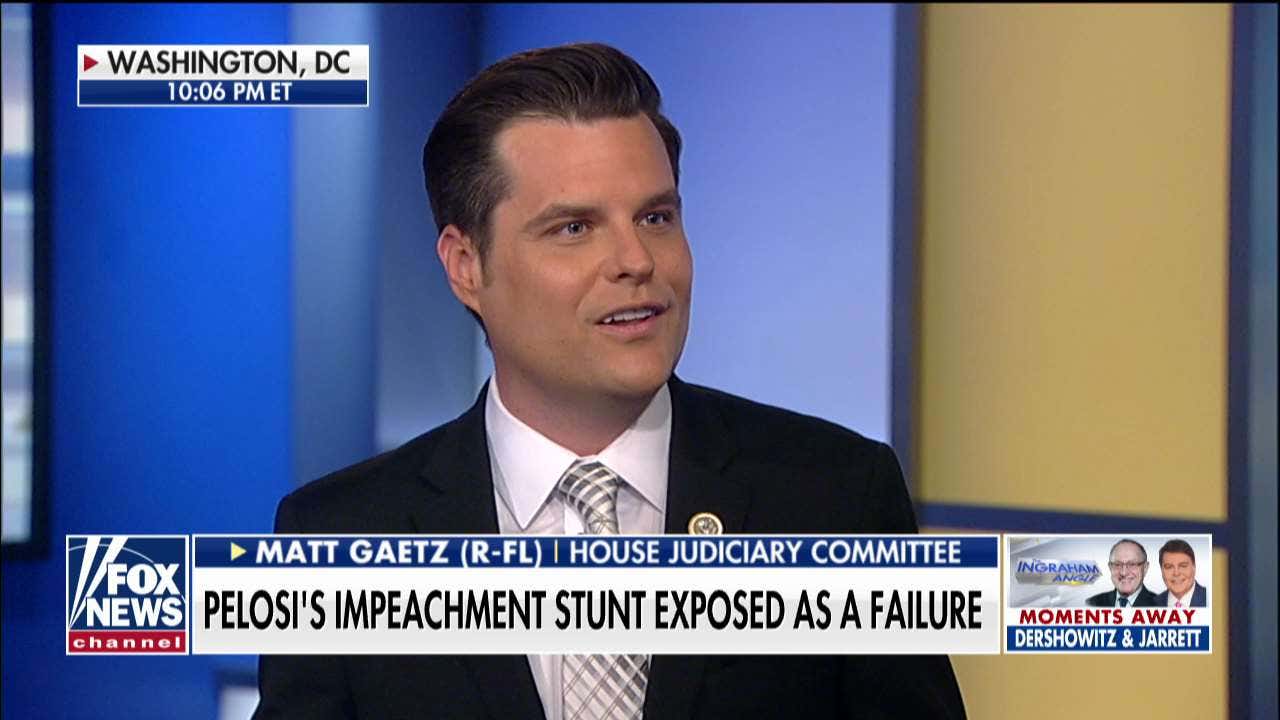 Rep. Matt Gaetz, R-Fla., remarked that the House Democrats’ weekly caucus meeting will likely be very tense, as Speaker Nancy Pelosi, D-Calif., will be preparing to transmit the impeachment articles against President Trump to the Senate after hold them since the end of last year.

Gaetz told Laura Ingraham on Monday’s “Ingraham Angle” that Pelosi will be holding the meeting on Tuesday, and that it will have a similar feeling to any recent or forthcoming meeting of the British Royals in the wake of the Duke and Duchess of Sussex’s surprise announcement they will “step” back from royal duties.

“This is a failed strategy and it’s not all that roads lead back to Putin for President Trump, it’s that all roads lead back to Russia for the Democrats in the absence of an agenda that actually works for the American people,” he said of Pelosi’s decision to hold the articles.

“[Tuesday] morning, Nancy Pelosi and the Democrats will huddle in their weekly caucus meeting and I expect it to be more tense than a family meeting at Buckingham Palace.”

Gaetz said there are Democrats in districts Trump won in 2016 that could be politically hurt by the impeachment proceedings, and the fact they continue to drag on presents a problem ahead of the 2020 elections.

“[They] feel like they’ve been walked off the cliff,” he said. “They were told that this was imminent, this was urgent, this was a clear and present danger. Even some of the more seasoned Democrats like Adam Smith [of Washington State] – the chairman of the Armed Services Committee where I serve – are telling Nancy Pelosi, ‘let’s get on with it’.”

The Pensacola-area Republican said the Senate trial is likely to result in Trump’s acquittal.

“We all know the president will be exonerated because he’s done nothing wrong,” Gaetz said.

Pelosi had held up sending the articles of impeachment to the Senate, citing concerns about Senate Majority Leader Mitch McConnell’s, R-Ky., objectivity and the lack of ability to call witnesses to testify in the trial in hopes of winning concessions from Republicans. But McConnell refused to give in.

In a television appearance over the weekend, Pelosi defended the delay, arguing Democrats were successful in making the case to the American people that the Senate trial should include witnesses.